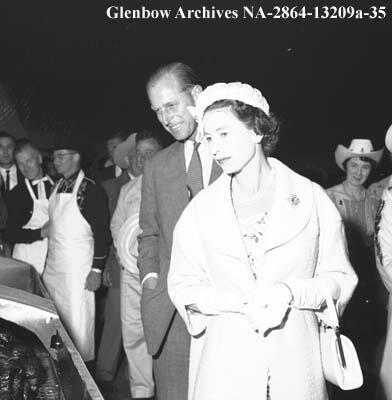 Visit of Queen Elizabeth II and Prince Philip in 1959, Calgary Herald. Courtesy of Libraries and Cultural Resources Digital Collections, University of Calgary. The visit included a tour of Britannia. The Queen was pregnant with Prince Andrew.

Beyond the Royal Yacht Britannia; Queen Elizabeth II’s Connection to a Calgary Suburb

An Original Owner Looks Back
By Robert Erickson (1990)

Calgary’s Britannia community is an attractive, mature neighborhood of well kept homes and treed lawns. These homes on curvy and hilly streets set this community apart from many in this city. Britannia is located on upland above the Elbow River and, to the south, the Calgary Golf and Country Club.

In the heady days before World War 1 Calgary was claimed to be “the fastest growing city per capita on the American Continent”. One booster and developer hired a planner to lay out a plan for Britannia (yes, the name goes back that far). The Calgary Herald in 1911 claimed it was one of the best laid out subdivisions around Calgary. It included parts of Riverdale and even River Park while Elboya included part of Britannia. In another map version of the same vintage Britannia (including Riverdale) is shown in streets laid out in a grid pattern without regard for the cliff and considerable topography. These early dreams of development were not fulfilled. Today older Calgarians only remember Britannia as a place from their childhood where they rode horses or shot gophers.

Calgary was not to languish forever. After two wars and a severe depression everything changed when oil flowed from the plains and people flowed to Calgary. Also in 1952, Elizabeth II was crowned Queen of England (and Canada). It was time to develop Britannia. It had lain dormant for some 40 years with the exception of a home or two. The hills were graded and new streets with new names surveyed. Appropriately, the streets reflected the names of the royal family as well as such names as Britannia Drive, Coronation Drive, Crown Avenue and Imperial Way. In addition, streets such as Madison Avenue and Crescent Boulevard which were named before World War 1, were extended from Elboya. 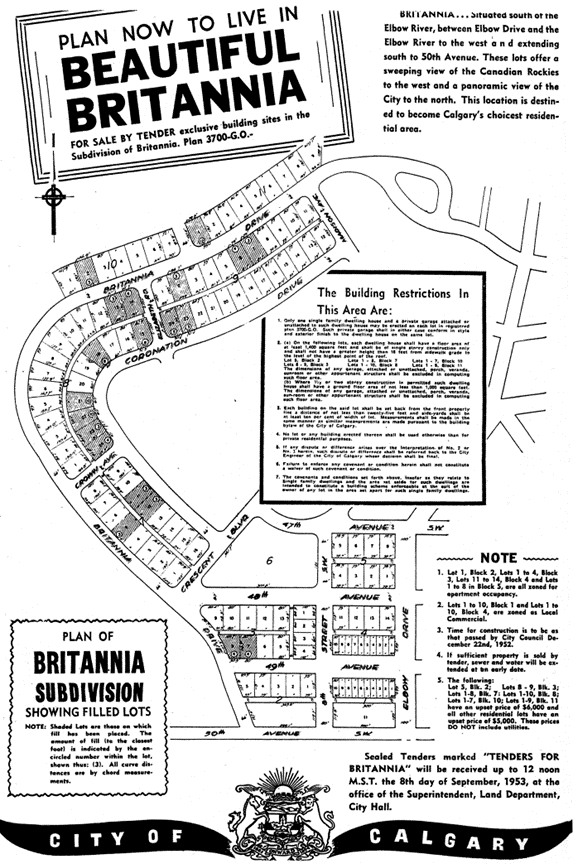 Before development in the early 1950’s, Elbow Drive was only paved to Sifton Boulevard where the street car tracks terminated. Beyond that a gravel road crossed an iron bridge, wound its way up the hill and carried on south past Burt’s Store and Windsor Park. At that time city planners, rather than developers, laid out the subdivisions, installed services and sold lots. Britannia was chosen to be the first “upscale” community built since World War 2. Lots were offered first in 1952 in the range of $4,000 to $8,000. This may seem incredibly cheap today but considering that the average lot price was closer to $250 these prices were high. So high in fact that when coupled with an economic downturn, few sold. This was despite the fact that throughout the city couples were forced to live in basement suites as there were no other accommodations and consequently people stood in line for hours hoping to buy lots when offered by the city.

The city tried again in 1954. Lot prices were halved to about the $2,500 to $5,000 range. Building was to commence within one year to avoid land speculation. Modest building area requirements were set, at least by today’s standards for any neighborhood. This time lots sold. Building in earnest began in 1955 and by 1956, Britannia was essentially developed. Architecture was very diverse. There were conventional two stories, flattops, butterfly roofs, “contemporary” and ranch styles. Few neighbourhoods before or since have such variety.

Before the lawns were in and the saplings were planted the whole area was either a swirling cloud of dust or a bog of mud. One enterprising newsboy found horseback to be the best means of travel. Winds were unimpeded. Many storm doors and garden gates were torn from their hinges.

Initially the city installed electrical services on conventional telephone poles, but the residents requested the idea of new underground wiring. Britannia became the first community in Calgary to feature this.

With its diverse architecture and attractive landscaping Britannia was judged fit for the Queen and on a bright summer day in 1959. As part of her city tour, she was driven along Britannia Drive in an open car past applauding residents. After that the community was on the city bus tours for years. The “ship house” on Britannia Drive was the favourite. With mature trees it is less prominently displayed now [EDITOR’S NOTE: the “ship house” is now torn down and replaced]. 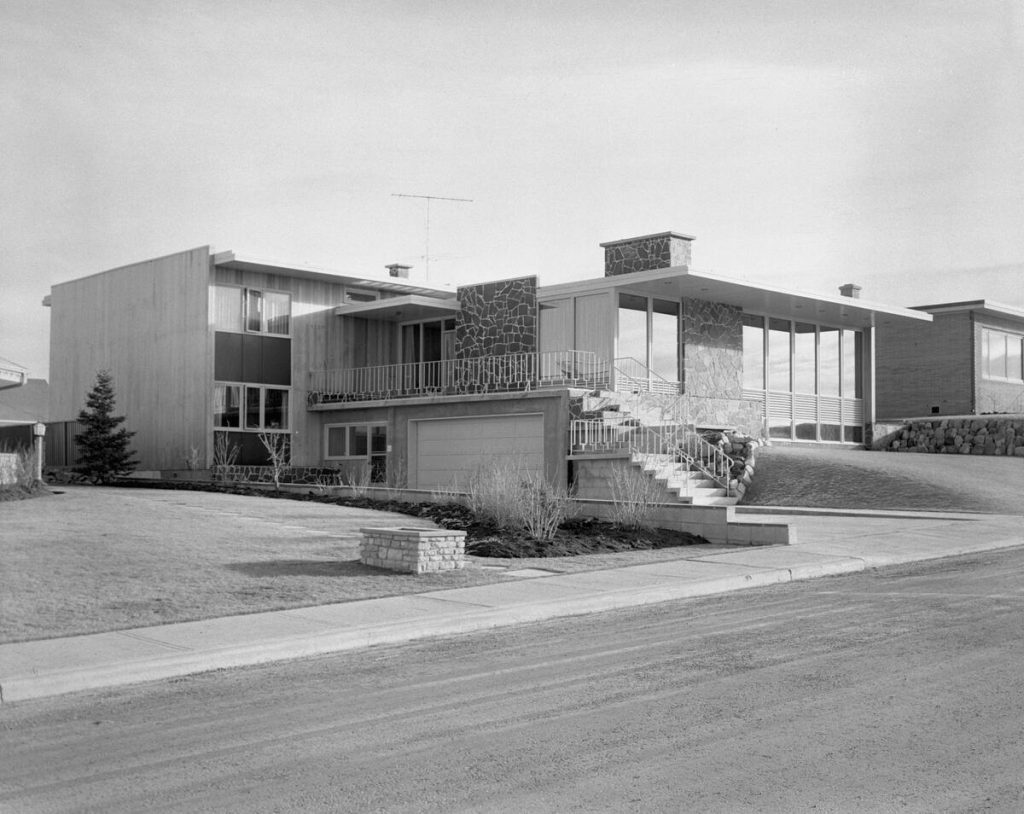 A rather average shopping centre was built simultaneously with the homes, but over the years has evolved into a group of highly specialized, classy shops with an attractive facade. Well maintained apartments separate the commercial area from the single family residences.

Early in Britannia’s history, the Riverview United congregation built a hall for church services and a variety of other purposes. When finances permitted the impressive church was built. In addition to serving religious needs it has housed a nursery school, kindergarten and even first grade when Elboya school was overflowing. It was also home to Scouts and C.G.I.T. units [EDITOR’S NOTE: and is now a Jewish synagogue].

The plan for Britannia provided for a park across from the church. When some neighbors with young families wanted a lighted skating rink, others objected. A daytime pleasure rink was the compromise solution.

From its beginning Britannia was populated with energetic young couples with lots of kids. Time passed. The children left home. Many homes were sold, some several times. However, through all this some of the original residents still remain and are sprinkled throughout the area. In the late 1960’s and the 1970’s many French families, assigned to Calgary by their companies, rented Britannia homes. One French company bought quite a few homes for its staff. As more time passed, a significant number of the second generation returned to Britannia with their spouses and children bringing a new zest to the community. The community association was reactivated, and residents raised funds with the city and provincial contributions to enable neighborhood volunteers to build an excellent children’s playground set. The association is also vigorously attacking the Elbow Drive traffic problem and its risks to its young school children. Because it is visually attractive, close to the city center and has enthusiastic younger people and supportive older ones, prospects for the future of Britannia are at least equal to its past. 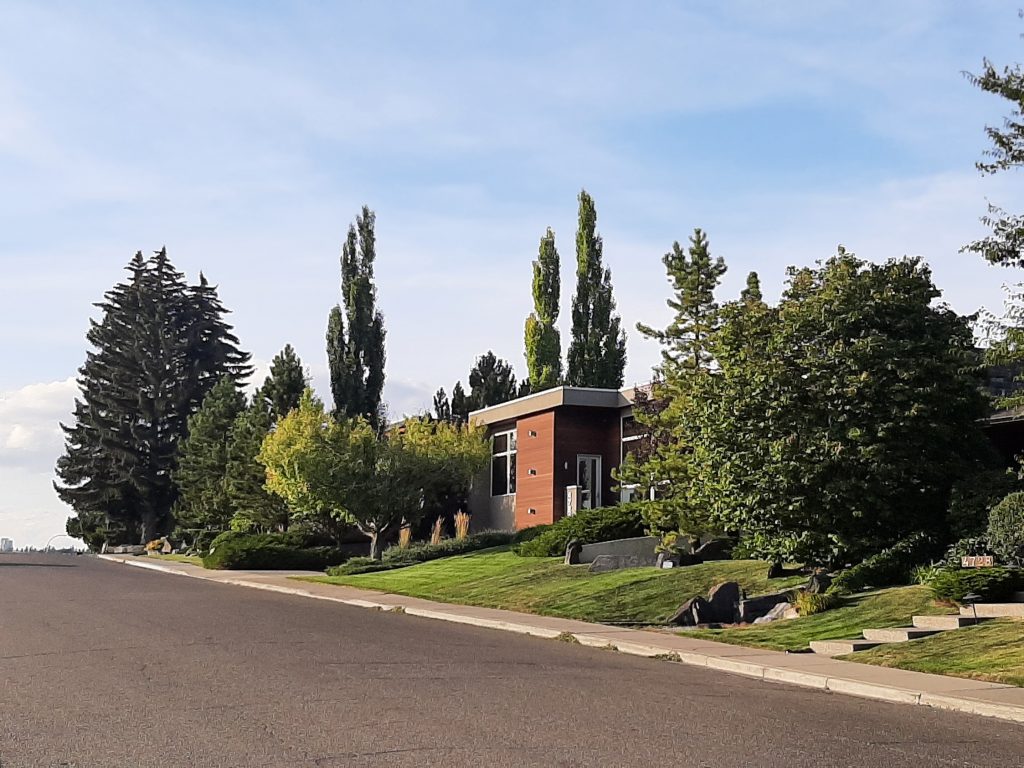 [Mr. and Mrs. Erickson continued to enjoy their home and their neighbors on Coronation Drive for two more decades, following Robert’s writing of this reflection in November 1990.]

In 2012, The Britannia Community Association celebrated the Queen’s 60th year on the throne with a tea at Elboya House in Stanley Park.