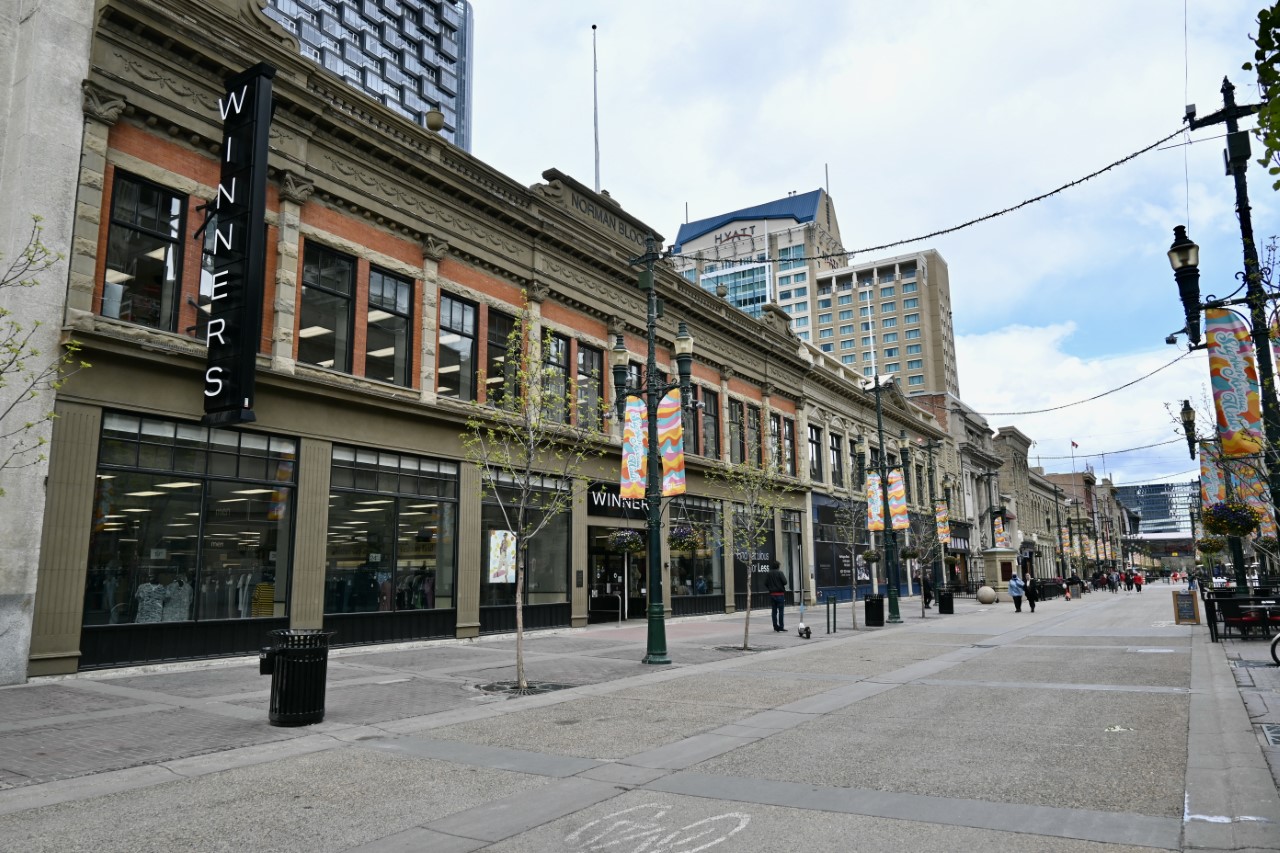 What does the historic district surrounding Stephen Avenue pedestrian streetscape, the heart of the city, mean to Calgarians? An application has been submitted to the City of Calgary for development of an entire city block encompassing 7th and 8th Avenues between Centre and 1st Street SW, including the historic Stephen Avenue walk. The proposal would involve demolition to varying degrees of 17 designated and listed heritage buildings, the most significant contiguous streetscape of sandstone buildings and the highest concentration of designated and listed heritage buildings in Calgary. The scale of the loss of heritage built form in Calgary is unprecedented.  Five buildings on 7th Avenue are designated as municipal heritage resources while amazingly only the Tribune Block at 118 8th Avenue has municipal designation  on Stephen Avenue. The Molson’s Bank next door has provincial designation. These buildings would have to be de-designated if they were to be significantly altered or demolished. The Heritage buildings listed on the Calgary Inventory of Historic Resources have no protection under present policy. These heritage sites are well researched and documented, and detailed descriptions can be accessed on Heritage Calgary’s Inventory of Historic Resources and CHI’s Stephen Avenue fact sheet. Heritage Calgary has an excellent article on their website at https://www.heritagecalgary.ca/heritage-calgary-blog/stephenave

It can be said that Stephen Avenue is the only recognized Historic District in Calgary. It is Calgary’s Main Street. The citizens of Calgary have long considered Stephen Avenue to be the heart and soul of the downtown core; it is the citizen’s municipal amenity space, and a tourist’s delight.  It is the embodiment of the true beginnings our commercial history dating back to the late 1800s and includes the Hudson’s Bay Company’s first downtown department store. The area is unique in the history of cities in Canada in that it represents a fusion of the story of the founding members of Calgary commercial history and a story of resiliency in building after the Great Fire of 1886 started the sandstone building boom. It now conveys a sense of place, a shared story of the founding of our city where permanent stone structures ensured the continuity of our earliest commercial avenues. It is a vital and vibrant cultural landscape, a beautiful three block long pedestrian promenade and a human scaled gateway to City Hall, the historic Arts Common and the new central library to the east.

The federal government has also recognized this value by giving National Historic Site designation to Stephen Avenue, which, while not offering any legal protection for the built form in policy, does convey what is morally and ethically right in the intent of heritage conservation goals. That intent is expressed clearly in The Standards & Guidelines for the Conservation of Historic Places in Canada: a pan-Canadian benchmark for heritage conservation practice in this country. It offers results-oriented guidance for sound decision-making when planning for, intervening on and using historic places

From the National Trust: Parks Canada via Historic Resources Management Branch, Alberta Culture: the rows of two to six storey commercial buildings that line both sides of the street continue to house a broad range of retail services, while their designs reflect the architectural revival styles of a bygone era, in sharp contrast to the office towers that now encircle the area.

It is that contrast defines Stephen and 7th Avenue and the entire block. It is a contrast that defines all the great cities of the world: the co-existence of old and new, the recognition and re-purposing of the past while moving forward, a collective memory of how this place was created. There is room for many facets of urban landscapes in Calgary’s downtown core; in fact there is a cultural need for it. This heritage district restores a human scale that is very grounding to pedestrians and cyclists and is very scarce in our downtown.

As for process and policy considerations so far, any consultation with Heritage administrators or stakeholders prior to application is unclear at this stage so details of what is considered expendable rely on renderings submitted with the plans, available on the City website. What is clear is that this is not an ‘urban renewal’ project, a rebuild of abandoned downtown blight or even a comprehensive solution to the housing, office vacancy and ‘vibrancy’ problems. Stephen Avenue is already a cultural and entertainment destination area and 7th Avenue could easily become more so with visionary adaptive re-use of its (designated) built form. The goals of the Municipal Plan and the Greater Downtown Strategy can be met with a careful and innovative approach to urban planning in heritage areas, not wholesale demolition and facadism.

There has been much discussion that along with demolition of at least five designated buildings there would be some preservation of the facades of some of the listed and designated heritage buildings on 8th, while gutting everything behind both avenues for construction of a covered mall, alleyway and tower development. Facadism involves retaining the facade of a building that has architectural or other cultural value and demolishing behind to create a blank canvas for a new build. Facadism is also a device of deception, literally retaining a mask to hide the true nature of what is behind it, in this case pretending that the heritage character and significance of the whole building extends past its front door when it does not. For the pedestrian it is reasonable to expect the spaces behind the facade belong to the building, that the windows were designed in a way to view the character details both from the outside and inside, that doors lead to magnificent entrance halls, staircases and turn of the century architectural exuberance. These are the character defining elements of both the designated and listed buildings slated for destruction. A facade is no longer a historic building with stories to tell and architectural detail to marvel at. Many of us will remember, for example, the Clarence Block at 120 8th Avenue. For many years it was home to the McNally Robinson bookstore with its beautiful gleaming woodwork, magnificent staircases and sense of comfort and tranquility. It later functioned very well as a much needed sporting goods store. All the other buildings on the block have their own stories to tell. The more working class vernacular designated buildings on 7th have a different story to tell, that of pedestrian scaled, funky shops and arts centres with defined twenty foot spacing between fine grained retail frontages reflecting the origin of Calgary’s character retail streetscapes.

Another culturally bankrupt thesis of ‘urban renewal’ from a heritage perspective is de-designation. In Calgary, much to our shame, the only protection we can give to our built heritage is that of designation as a historic resource. This is only done by or with the permission of the owner of the resource. A Designation bylaw is drafted by administration and the owners, and enacted when passed by City Council. This designation theoretically preserves the character defining elements and significance of the resource in perpetuity, for the benefit of the resource, the community and the citizens of Calgary. De-designation on the other hand is a mechanism to remove protection to facilitate economic gain. In some instances such as fire or flood the resource may be lost or compromised beyond rehabilitation and de-designated as a result but in Calgary de-designation has been contentious and divisive. The Eau Claire smokestack and Nimmons House are recent examples of this.  Removing landmark designation from historic structures undermines the basis of modern best practises in city-building in historic areas and  the City’s own heritage policy, every time it is invoked it is labelled a one-time occurrence, an exception to the rule, and every time that is shown to be a cynical fallacy.

CHI urges the City of Calgary to take into consideration the intent of preservation principals of protection, enhancement and designation (as outlined in policy in the Calgary Heritage Strategy and Municipal Development Plan.) when considering development on historic sites or streetscapes, and send a message to the citizens of Calgary that heritage preservation is a an integral component of urban planning and urban growth, of city building for the benefit of all of its citizens. A starting point would be a City led engagement process with the citizens of Calgary and heritage and business stakeholders, as well as an independent Heritage Resource Impact Assessment, in addition to the Heritage Value Analysis currently under review by the City. There must be a transparency of process that  puts a true value on this block that includes the economic, social, cultural and environmental costs of what is about to be lost forever.

We urge concerned citizens to contact their Mayor and ward councillor, no matter what area of the city you live in. Stephen Avenue is your Mainstreet wherever you live; it is a cultural sanctuary for all of us. Please contact the offices of the Mayor and Councillors on the City website   and the file manager for the project at the link below.

Let your thoughts be known, have a voice in how you want your city heritage to be cherished, be counted among those that can see a path to success in reaching the goals if urban growth and change without losing our soul in the process.

Development and Planning City of Calgary: