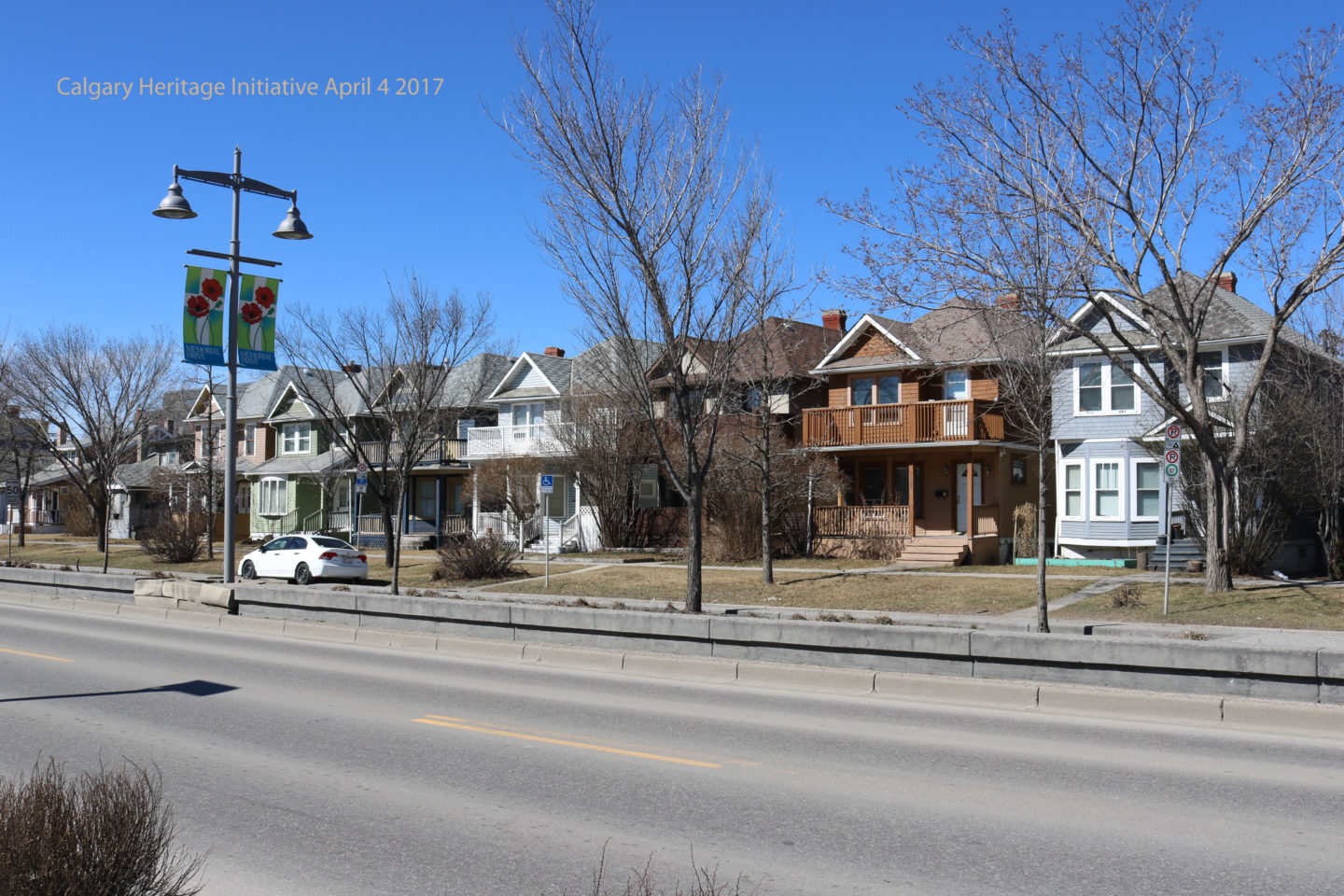 The Calgary Heritage Initiative (CHI) is the only city-wide, grassroots heritage group dedicated to advocating for the preservation of buildings and sites of historic and architectural interest.
The upcoming municipal election campaign is an opportune time to ask your ward candidates and the mayoral candidates about their positions on these three key heritage issues: de-designation, densification and benefits.

We need Calgarians to join us in advocating and getting support from our elected, municipal government to protect and preserve Calgary’s heritage and historic sites. You can also help us by forwarding this information to like-minded supporters and advocates for heritage.

Issue #1: De-designation – How do we protect our historic buildings and resources?

I #1: When City Council voted in 13-2 in favour of de-designating the Eau Claire Smokestack, this opened the door for future applications as well as delegitimizing legal protection for a historic resource. Their vote repealed the bylaw signed in 2008, which legally designated the Eau Claire Smokestack as a municipal historic resource, despite the Calgary Heritage Authority recommendation to not de-designate.

Q #1a: What can be done to stop de-designation from becoming a regular occurrence since there is now a precedent? How can The City of Calgary ensure that current historic sites are not put at risk of losing their designation given the push for inner city densification and preference for big development?

Q #1b: How are you going to safeguard against a “what’s the point” attitude from becoming the norm when it comes to historically designating these properties and sites in the first place?

De-Designation of Eau Claire Smokestack Background
Harvard Developments approached The City of Calgary about moving the Eau Claire Smokestack as they estimated this would add $17 million to their proposed development a mix of residential, retail and office space in the downtown residential community despite the controversy of adding more office space to an already saturated downtown. Heritage advocates opposed moving the historic smokestack, arguing it needed to remain in its original location to maintain historic integrity.

Part of Harvard’s pitch included a preservation agreement between The City and Harvard, which is to protect the smokestack while it is being moved and pay $300,000 into a Heritage Incentive Reserve fund.

The Calgary Heritage Authority (CHA) is a council-appointed advisory group that advises Council on all matters related to Calgary’s historic resources in its inventory including designation, restoration, alteration and demolition of sites. While the CHA recommended against this move, Council chose to go ahead with de-designation. Only Councillors Druh Farrell and Brian Pincott voted against repealing the bylaw.

I #1 Calgary does not have a large inventory of built heritage as most of it came from Calgary’s first building boom in 1912. Once it is gone, it cannot be replaced. According to the National Trust of Canada, over the past 30 years Canada has lost 23 per cent of its historic building stock in urban areas.
Calgary approved its latest densification strategy in 2009, but the election of Naheed Nenshi in 2010 marked a shift in The City’s political will to enforce it. During the last election, Mr. Nenshi campaigned on ending the “sprawl subsidy.” Eventually, he wants half of new homes to be built in the city’s core. (Source: National Post “Calgary’s inner city revival aims to spark downtown living, but suburb-loving citizens might not be ready” June 27, 2014.)

Q #1 What would you do to ensure that The City is not demolishing heritage buildings to satisfy its densification strategy?

I #2 Recently Hillhurst, one of Calgary’s oldest communities, saw a radical change to its streetscape along Memorial Drive NW (next to the Kensington Riverside Inn) when 13 character homes were demolished to build a 75-100 low rise residential building.

Q #2 What would you do for the inner city communities in terms of a densification strategy to balance current residents’ concerns about spot rezoning or up-zoning and the loss of their community’s historical character?

I #3 Inglewood is Calgary’s oldest neighbourhood, having been established next to Fort Calgary in 1875. The founding of the community included the development of 9 Avenue SE, which is Calgary’s first authentic main street. Today Inglewood is a vibrant, eclectic and ever-evolving arts and culture-filled district with more than 100 shops, boutiques and eateries attracting both locals and tourists.
The 2014 economic downturn saw 46,000 jobs vanish in the oil and gas sector critically impacting the downtown core including transit ridership which dropped by nearly five per cent. Yet, plans continue to build a four-lane bridge to replace the current one along 9 Avenue SE (near Fort Calgary) so that Calgary Transit can have four lanes for rush hour buses. This will change 9th Avenue SE from a pedestrian corridor to a traffic corridor. This redevelopment of Inglewood Main Streets featuring four lanes of traffic is going to have a severe impact on the walkability as well as pedestrian traffic along 9th Avenue SE and the survivability of Inglewood’s small businesses.

Q #3 What approach would you recommend so that the main street redevelopment is driven by stakeholders’ input and the value, character and history that makes Inglewood so unique versus pushing for four lanes to accommodate rush hour buses? How would you get the key City departments, Transit, Transportation and Planning and Development, to work together as a team and collaborate with Inglewood stakeholders?

I #1: Investing in the preservation, rehabilitation and ongoing use of heritage buildings and other historic places has economic benefits for both individuals and communities. Heritage conservation can lead to higher property values, increased tax revenues, more jobs, revitalized neighbourhoods and economic growth.
For the last ten years the 1904 Queen Anne Revival-style home owned by businessman Enoch Samuel Sales has been sitting on large parking lot near 12th Avenue and Macleod Trail SE. Previous councils have made promises about restoring one of the last homes in Victoria Park. However, none have been kept.

Q #1: As there is a general lack of understanding as to what the benefits of heritage are, what would you do to educate and gain support from your fellow councillors and the mayor? How would you build “the will” to take action?

2. Heritage Conservation Means Jobs
Heritage conservation supports the development of a skilled, well-paid workforce in the building trades and traditional crafts. It also creates demand for professional services in areas such as architecture and engineering. Rehabilitating heritage buildings is an effective strategy for revitalizing older commercial districts.

3. Heritage Tourism is a Growth Industry
Heritage places provide the authentic experience heritage tourists seek. Unlike tourist attractions that must be built new, historic places are unique tourism assets that already exist in most communities. As an added benefit, the promotion of historic places as tourist attractions helps local residents develop a greater understanding and appreciation of their own culture and heritage.

4. Heritage Enhances Competitiveness
Heritage buildings and historic streetscapes convey an appealing sense of place and help to shape a community’s unique identity. In a globalized world, quality of place is a drawing card and difference is an asset. Communities that integrate new development without sacrificing their distinctive historic character will have an advantage in attracting the talented workers and innovative businesses. (Source: Economic Benefits of Heritage Conservation: Saskatchewan Ministry of Tourism, Parks, Culture and Sports)