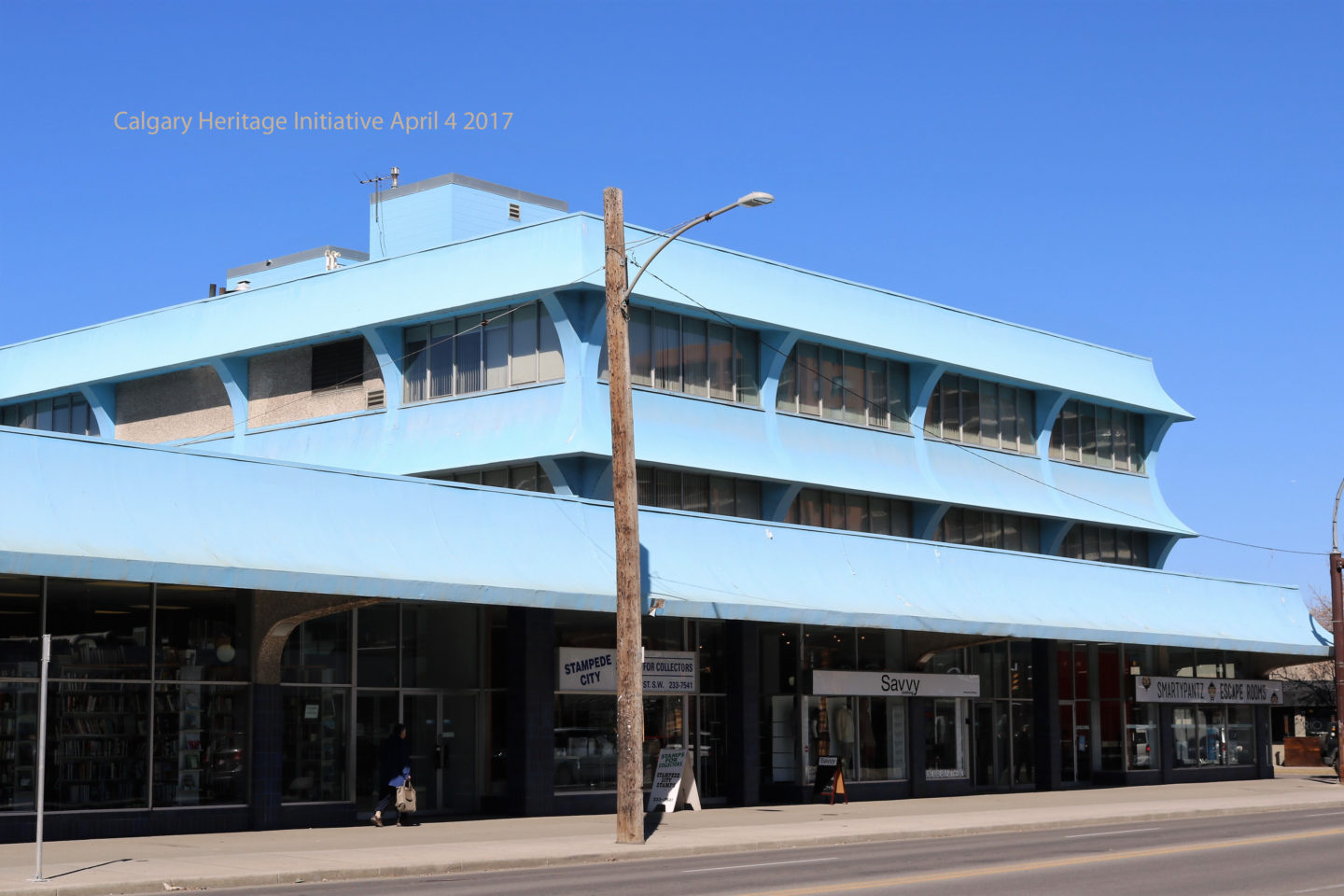 The intersection at 17th Avenue and 14th Street SW has been a crossroads for Calgarians for a hundred years or more. For the last two decades, a book store has been a tenant on the main floor. This 1609 address may soon become the Sentinel, a residential-commercial project containing over 400 units, casting a 28-storey shadow. Is the Condon Block a part of Calgary’s architectural and formative history that we should value?

Once called ‘Jimmie’s Corner’ and now the Condon Block after a committed Greek entrepreneur and builder, the location and structure is an irreplaceable part of Calgary history.

The original owner’s love of sport helped many young Calgarians participate in amateur sports.  Starting in 1921, Jimmie Condon nurtured Calgary’s ‘team spirit’ and donated his signature blue and white uniforms to hundreds of athletes. On a hot day, his milkshakes were too cool and delicious to pass up and his original home-made candy was a treat for any age. The Condon Block on the northwest corner of 17th Avenue, later called ‘Jimmie’s’ was the site of the first soda fountain in Calgary and ‘The Mount Royal Tea Room’.

Condon so loved the area near his Tea Room that he once lived in the red-brick Nimmons house on the hill, the original ranch house in the area, now Bankview.  Later Jimmie moved so that Mrs. Isabelle Nimmons could retire in her original home.

My childhood neighbor in Bankview and I often visited Jimmie’s Café. In the fifties, our families walked down to 14th Street for food, hardware, clothing and ‘a trip to the bank’. ‘The Mount Royal Tea House’ became ‘Jimmie’s Cafe’, a spot for pedestrians to relax for lunch after shopping on 17th Avenue. After picking up groceries and errands, we enjoyed a soda and a sandwich on the upholstered silver chairs.  At age 4 or 5, we twirled dizzily on round cafe stools at ‘Jimmie’s Cafe’.  Carrying packages up the 17th Avenue hill seemed a trek to get home, but Jimmie’s candy made it all worthwhile.

‘Jimmie’s Corner’, later called the Condon Block flourished in three forms since 1913, surviving a fire in the mid-1960s.  Today it is slated for demolition by new owners. In its place, a proposed ‘28 storey mixed-use structure would probably transform the major Calgary intersection near Bankview, Lower Mount Royal, Sunalta and Beltline.’ Why should Calgarians care about the architecture of this legacy structure? 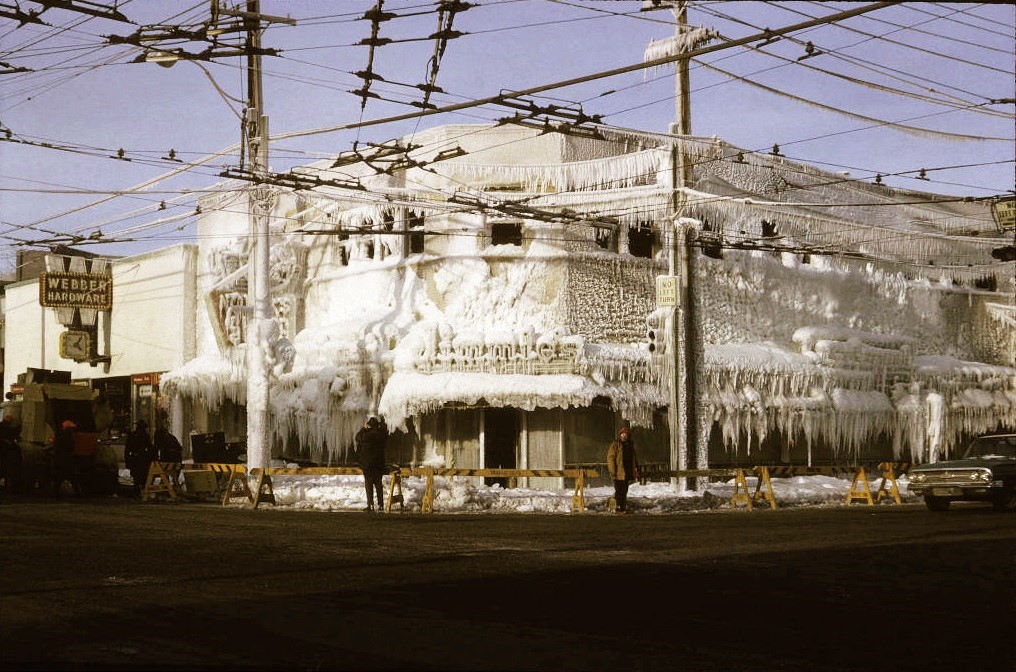 Despite its history of the ‘Mighty Calgarian’, Jimmie Condon, the Block has never been officially designated as a Provincial or Municipal Heritage Site. The reason lies in the complexities of Alberta’s heritage law, City development policy, and preservation costs which an owner must account for. In this case, the building was purchased for development and despite citizens’ concerns, the project may go ahead.

Our City of Calgary’s ‘Inventory of Evaluated Historic Resources’ cites its significance:

The Condon Building is valued for its distinctive modern style. Built as a three-storey modern commercial and office building, it expresses modern design through its distinctive blue pagoda-style flared roof design, ribbon windows and blue tile cladding at the retail level.

Mid-Century Modern architecture was stylish in the post-war era, thanks to the buildings of Frank Lloyd Wright. Characterized by flat planes, large glass windows and open space, these buildings — built from 1945 to the 1980s — featured simplicity and retail integration.  Borrowing from Asian and Mediterranean designs, sliding doors and recessed vistas, modern design often showcased gardens or ponds.

The Condon Block’s sky-blue colour, a nod to Calgary’s bright sky is serene and Zen-like, bringing openness and light to street level and above.  Changes of elevation as seen in the Condon Block emphasize swooping pagoda-roof, unique building materials, softened geometric lines and recessed split levels. Blue was also Jimmie’s favorite colour, being the colour of Greece.

Whether Condon’s name is associated with sports or business, Jimmie’s story as a self-styled leader provides insight into early Calgary. Calgary shows Jimmie respect because his life story epitomized the merits of his community-building talents.   Meet ‘Jimmie the Greek’, and answer the question ‘Is this legacy property of value to Calgarians?’

Jimmie the Greek – The Man 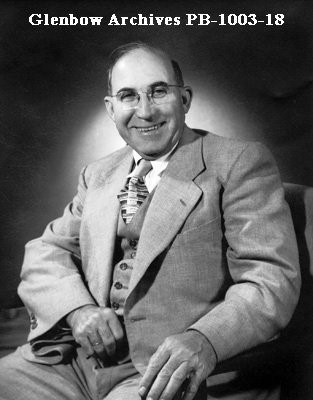 Jimmie’s life story may surprise you, dating back to the late 1880s when a young man named Demetrios Kouimgis of Greek Orthodox origin was born on the Mediterranean Sea in a tiny village called Hora, in Turkey. In his early twenties, Jimmie Condon immigrated to Calgary, around the time of Calgary’s first great settlement boom. 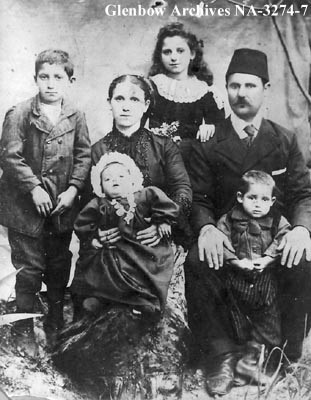 Little is known of the family’s difficult journey.  He changed his name to James A. “Jimmie” Condon and the family began a series of businesses, a tea house on 17th Avenue, a grocery store on 4th Street and ‘Jimmie’s Palace of Eats’ on Stephen Avenue (known then as Eighth Avenue) across from the original Hudson’s Bay. 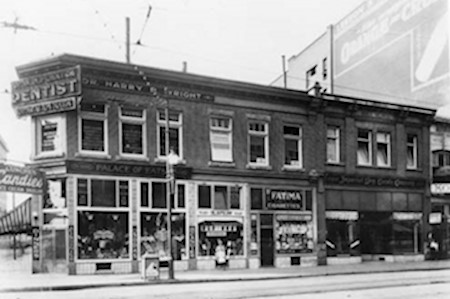 A well-known merchant, developer, sports promoter, and restaurateur, Jimmie hosted the ‘Palace of Eats’ on 8th Avenue and 1st Street, when he first immigrated to Calgary.  He and his family opened Mission Grocery in the corner storefront of the Aberdeen Block, a three-storey brick building at 4th Street and 22 Avenue between 1925 and 1945, offering the best olives and olive oil, Greek spices and delicacies in town. 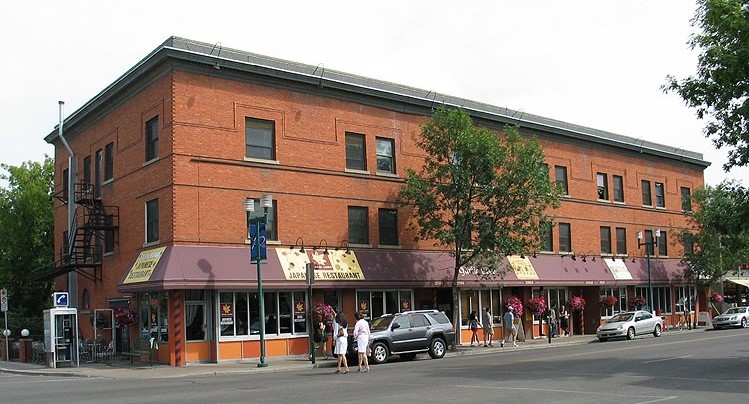 With Jimmie’s love of fine food and people, his enterprises thrived in the heart of the city.  Jimmie served Calgary’s first milkshakes at his soda fountain when he opened the popular The Mount Royal Tea Room on 14th Street and 17th Avenue SW, in 1913.   Mount Royal, Sunalta and Bankview residents patronized Jimmie’s Tea Room.  Families were welcomed into the cozy corner. The building burned down in the early 1960s, replaced by the modern blue Jimmie Condon building. 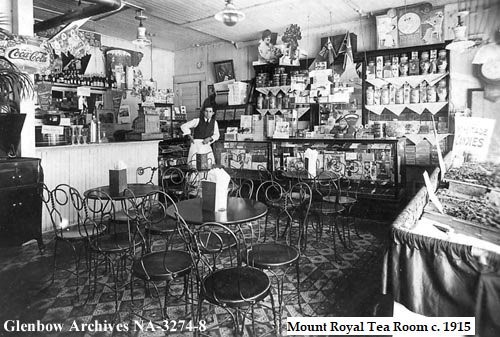 Jimmie and his wife, Maria, shared the running of all their operations. Although they had no children, they both encouraged local youth in the growing city of Calgary, sponsoring sports teams, called the “Jimmies”.

Always proud of his Greek heritage, Jimmie was the first President of “The Hellenic Society” established in Spruce Cliff during the late 1970s. The Community maintains Hellenic culture in Calgary with an accredited Hellenic Language School. They also founded and operated the popular Calgary Greek Festival until 2017. 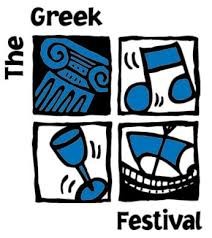 Calgary honored Jimmie by naming a major Calgary Sports Arena after him when he was in his eighties.  Today the Jimmie Condon (and Rose Kohn) Arenas, located in Kingsland honor his extensive contributions to amateur sport. The noted Jimmie Condon Athletic Scholarship, established by the Province of Alberta supports full-time student athletes at Alberta Universities, Colleges and Technical Institutes.

Inducted into the Alberta Sports Hall of Fame in 1981, Jimmie worked closely through the years with his brother, Ernest Paul Condon, donating four Greek statues to the University of Calgary, housed in the atrium of the Administration building. When Jimmie died that year, his brother said:

There was no end to Jimmie’s sponsorships. He was quite amazed when they named the arena for him.  It was quite an honor.

If we wonder who the early community-builders in our city were, the life story of Jimmie Condon tells a true tale of one man who built a Calgary legacy. Evidence of his philanthropy survives in Calgary’s history and the architecture of the Condon Block.

Patricia Paterson is a Calgary author, posting Calgary History facts and stories on the Calgary Heritage Initiative (CHI) website. She is currently writing a war-time novel called ‘Perfect Circle’, poetry and ‘character tales’ set in modern and ancient Calgary, Scotland and the Rockies. Patricia is a member of CHI.

Copyright 2018, Patricia Paterson. Reproduction not permitted except by permission of the author patriciam18a@gmail.com