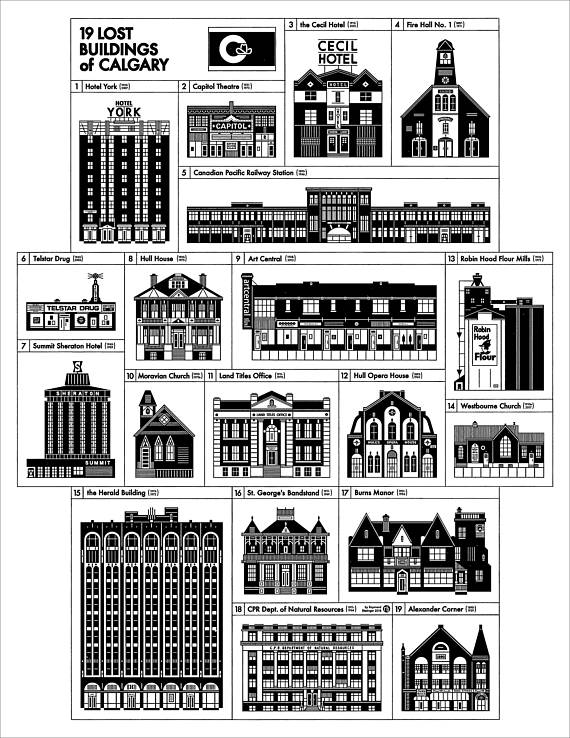 In 2018 Montreal artist with Alberta roots, Raymond Biesinger, generously partnered with CHI to offer his new Art Print: 19 Lost Buildings of Calgary to our heritage community.

The sale is now closed. Thanks to all who ordered.

Raymond’s art print was featured in Swerve Magazine, March 23, 2018
For more information about the artist or to order this print or others in the collection direct, visit fifteen.ca

Included in the image:

4. Fire Hall No. 1 (1887-1911, built immediately after the downtown-destroying fire of 1886 that officially ended “wooden” Calgary and started “sandstone” Calgary)

5. The Canadian Pacific Railway Station (1893-1966, neighbour to the Palliser Hotel, it stood on the same parcel of land currently occupied by the Calgary Tower)

11. Land Titles Office (1911-1970, built to be completely fireproof, it made way for the current Court of Queen’s Bench)

14. Westbourne Baptist Church (1910s-2017, “the spiritual home of premier William Aberhart, co-founder of the Social Credit Party of Alberta, which dominated Alberta’s legislature from 1935 to 1971”)

18. The Canadian Pacific Railway Dept. of Natural Resources (1911-1966, headquarters of CPR’s efforts to exploit the southern prairies’ natural resources, it too stood on the same parcel of land currently occupied by the Calgary Tower)

19. Alexander Corner (1890-1929, had a very similarly designed “twin” across the street, was destroyed to make way for the 1920 expansion of the Hudson’s Bay building)