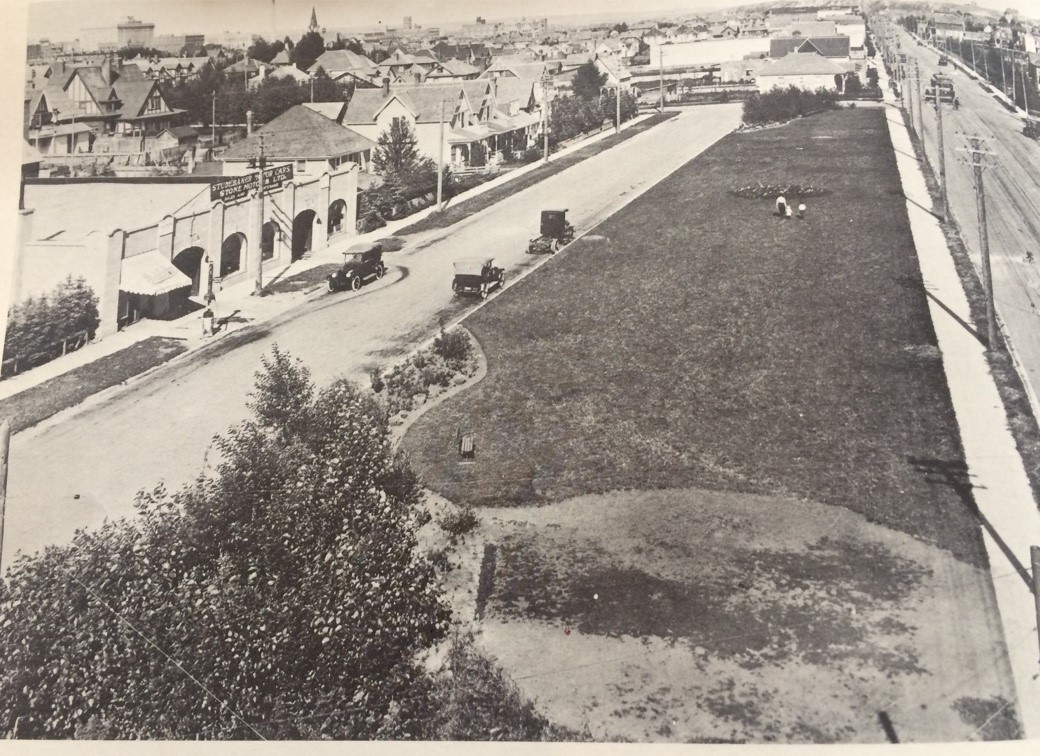 The Green “Heart” of 17 Avenue

The responsibility of Calgary’s history rests with all citizens. Our heritage is the foundation for the future. With between 50,000–70,000 citizens living in the City Centre and more visitors each year, there are high hopes for its preservation and distinguished heritage. Much of Calgary’s architecture and cultural landscape has vanished due to fire, demolition or expropriation in favor of high density and fast development. Seventeenth Avenue is where Calgary meets, relaxes, creates art, shops, enjoys architecture, where we celebrate our wins and losses. The legacy that we know and cherish is just as valuable as the future we seek. 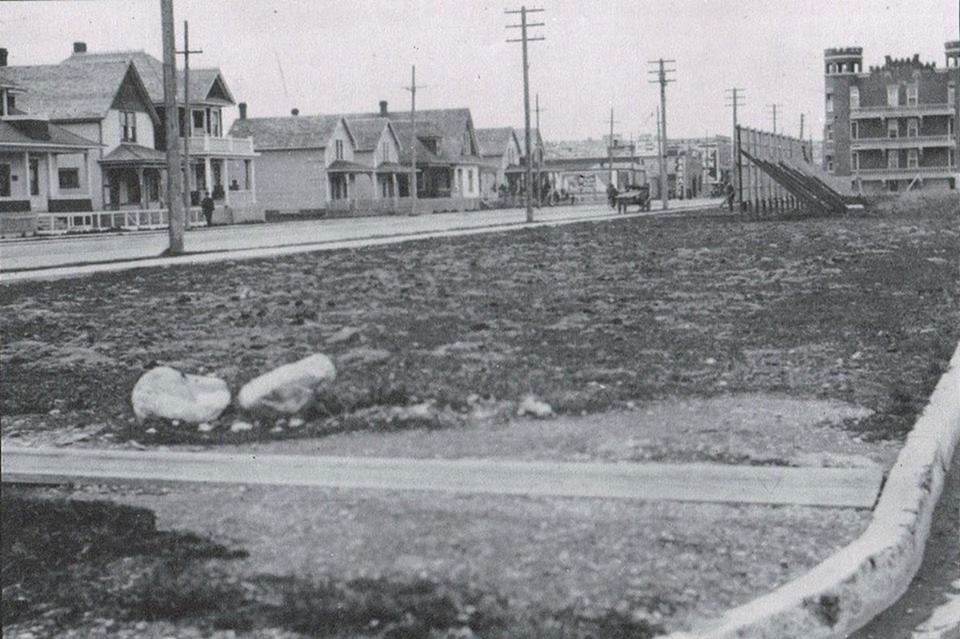 Nestled at the heart of Calgary’s longest and straightest avenue, this gem of a park is a meeting place at the hub of Seventeenth Avenue. You may walk past it without recognizing the plaque on a sandstone rock because it is at the hub of the Avenue experience. The unique parcel was created as a result of the colliding of two different survey patterns, one aligned with the CPR tracks and one aligned with 17 Avenue. (Beltline ARP). The 2019 ‘Beltline Area Redevelopment Plan from City of Calgary’ remarks on this park:

‘Tomkins Gardens is the green “heart” of 17 Avenue. This park must continue to be maintained and enhanced to the highest possible standard. (Page 31)

First dedicated in 1916, as a ‘Park for the quiet and restful enjoyment of citizens of Calgary’ Tomkins Park has been an integral piece of the Calgary inner city psyche, known as ‘Uptown’, ‘The Red Mile’ or the ‘Retail, Entertainment District’ at 8th Street and 17th Avenue. It continues to be a hotspot for hockey fans during the playoff season.

‘Tomkins Square’ once known as ‘Gardens’ was officially donated and dedicated to Calgary citizens by Henry and Elinor Tomkins, an endowment that inspires gratitude for this couple’s generosity and foresight. The City of Calgary rededicated the park in 1988, changing the name to ‘Tomkins Square’ and placed the commemorative plaque. 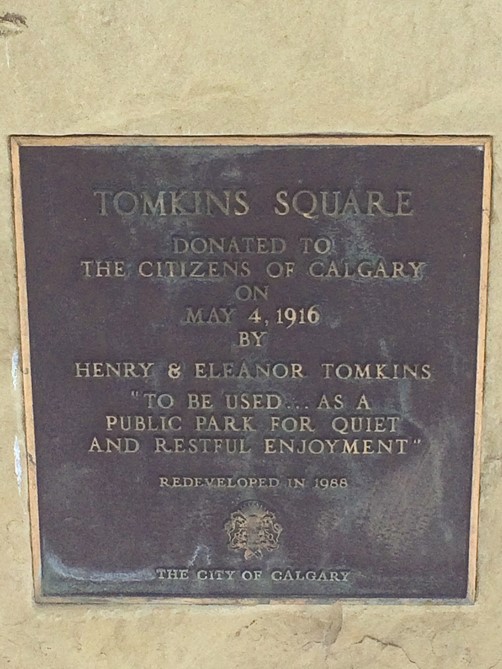 The conditions set by benefactors Henry and Elinor Tomkins were clear. They stipulated it as a park in the full sense of the word, for citizens to enjoy, not to be used as a site for political or religious causes. Tomkins Gardens (later Tomkins Square Park), the three-sided lot (or “gore”) on 17 Avenue, between 7 and 8 Street, was gifted to The City in 1915 by Mrs. Elinor Tomkins, acting on behalf of her late husband Henry William Tomkins. The land was to be used for park purposes and was to be known as Tomkins Gardens. 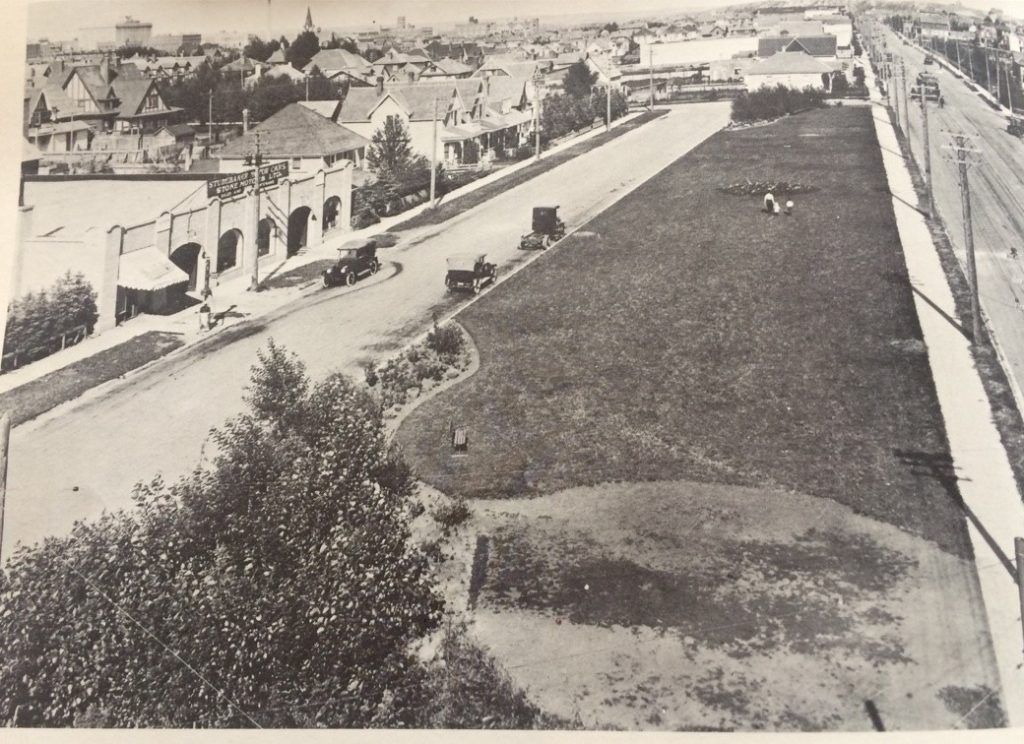 ‘Calgary Then and Now’ by Vicky Williams, 1978, page 57
Courtesy of the Glenbow Museum Archives

Dr. Harvey Buckmaster, Bankview Community activist and physicist, grew up in Calgary during the thirties and recalled the Beltline environment. He cited Tomkins Park as an important geographic and historic landmark. Buckmaster noted that above ground streams from the south and west meandered to a pond on the west side of the park where water gathered in the spring. It was a gathering place in Lower Mount Royal where friends met.

In the 70’s, Jack Peach wrote of University of Calgary archeologists who were called to the Mount Royal Village building site to excavate found ancient bison bones. Scientists noted the animals had been grazing on grasslands near streams that emptied into the Elbow and Bow River. The flatter land at the foot of the Mount Royal Hill at 8th Street, now the focus of Seventeenth Avenue, was part of the early river escarpment where the Tsuu T’ina (Sarcee Nation) tribes hunted buffalo up to 8,00 years ago, a time when urban environments and roadways were non-existent.

Since 2000, the park has acquired a Gazebo at the west end and a Galaxy Exeloo, a public washroom facility on the 7th Street side. Music and Art Walks co-exist with passers-by and those who stop to visit, walk their dog or sit in the sun.

Recently, I enjoyed a tasty meal with a childhood friend in the quaint restaurant. Both graduates of Western Canada High School, we shared fond memories of ‘Buon Giorno’, where many fellow students met. Originally, it was a Mexican eatery, ‘Prairie Dog Inn’. Looking out the window across the street at Thompkins Park on 17th Avenue, we saw Saturday shoppers, bench-sitters and pedestrians. Our conversation turned to the developments and tall buildings encroaching the avenue from Beltline. 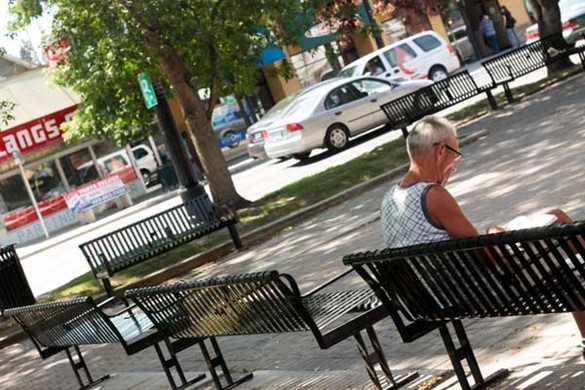 Unknown to many, ‘Tomkins Square’ or ‘Gardens’ may soon see irreversible change to accommodate an 8-storey building, possibly a hotel, across the street on Seventeenth Avenue. Directly opposite the west end of the park, three early-century businesses, once Calgary residences, will be demolished, including the beloved Buon Guiorno Restaurant.

We wondered how mid-afternoon sunlight, which usually brightens Tomkins park, will be affected if a building over the existing two storeys is built. Undeniably, a park relies on sun to keep its grass green. We could see from where we sat that the shadow was almost touching the sidewalk by the park at 1:30 pm on the Spring Equinox of March. It became apparent to us that shadows cast by an 8-storey hotel would cut into the narrow rectangular park, altering its ambience and pedestrian aspect.

Tomkins Park depends on sunlight. City documents, such as the Beltline and Lower Mount Royal Area Redevelopment Plans, and the Centre City Plan (2007, currently being refreshed) include policies to protect sunlight exposure on parks and sidewalks along 17th Avenue. How will encroachment of the shadow of an 8-storey building make a difference to the sunlight cast on Tomkins Park? Will these ‘Shadow Protection’ contingencies protect Tomkins Park which now sees a shadow from an existing two-storey building reaching nearly to the grass at midday? If an 8-storey building is built, even with set-backs, would the park be in shadow at midday and thereafter? The lawn in the little park could be adversely affected; would this result in more concrete being poured to replace dead grass?

City policy supports densification in our inner-City neighbourhoods by “building livable, inclusive and connected neighborhoods that put pedestrians first.” The developer, ASI, Arlington Developments, headed by CEO, Frank Lonardelli, has the right to knock down the two-storey early century structures because the buildings are NOT designated Historic Sites at any level of government. It is at the discretion of owners to apply for designation and the City does not have a bylaw in place to protect these buildings. Heritage building views could be obscured as would views for residents in nearby Upper and Lower Mount Royal. Nearby residents and local Community Associations have voiced many of these concerns in past, especially the height issue and impacts of ‘relaxing of zoning’, through consultations and letters to the City. 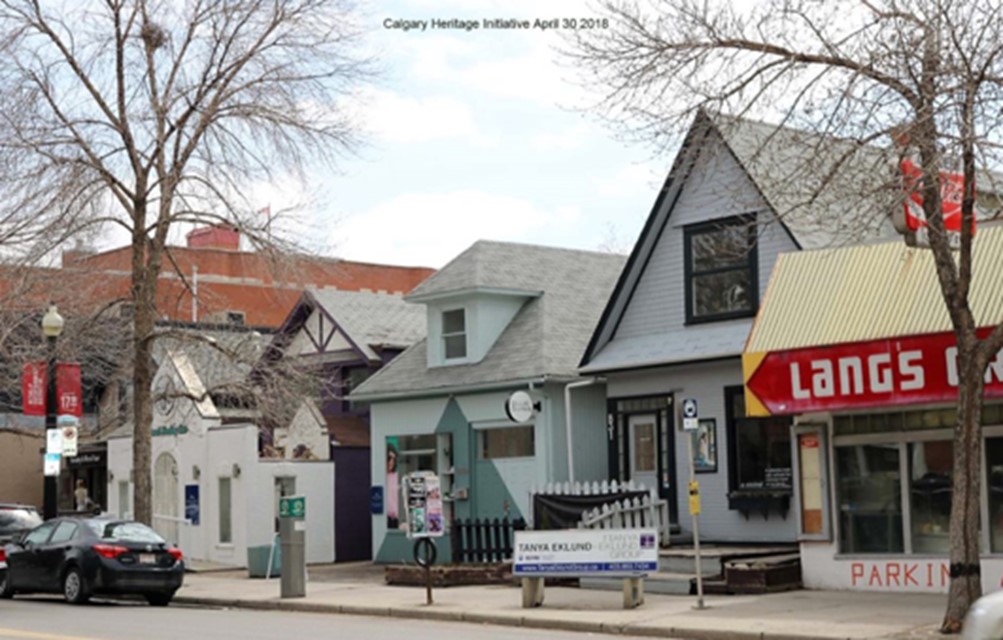 It is of interest that many recognized historic buildings and sites are very near to this proposed development. These buildings reinforce the historic neighborhood character. One wonders how the historic nature of the neighborhood will be retained to accommodate pedestrian citizens in the future if developments like Park Royal go ahead. Ten other Heritage structures within blocks of the Park are mentioned below, not to mention the two 1911 structures next door and the 1930’s commercial building on the west corner (not inventoried or designated):

A famous park of a similar name is found in East New York. Immortalized in a song ‘Meet me in Tompkins Square Park’, (2015) by Mumford and Sons, a U.K. rock band, the lyrics speak of melancholy twilight goodbye to a lover. Our ‘Tomkins Square Park’ is just as special to Calgary. May sunlight shine brightly on Calgary’s Tomkins. 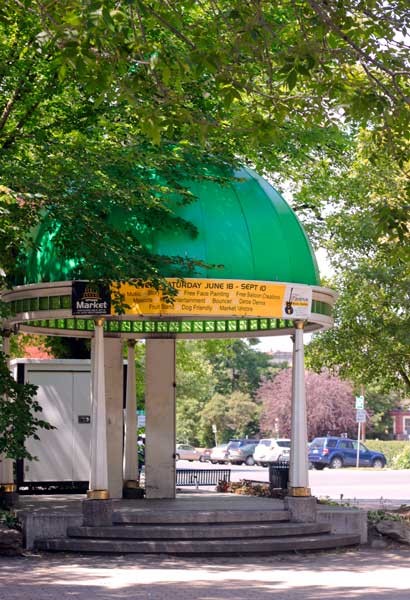 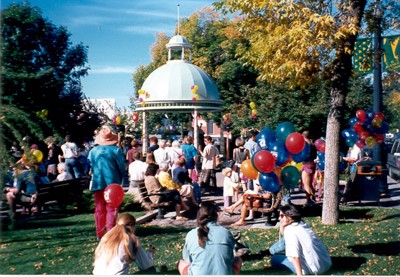 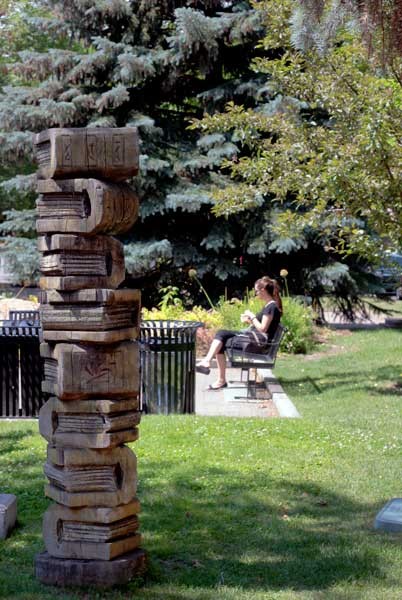 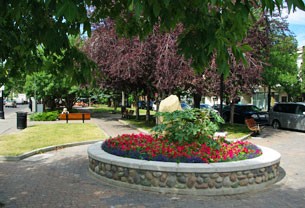 Patricia Paterson is a Calgary author, posting Calgary History facts and stories on the Calgary Heritage Initiative (CHI) website. She is currently writing a war-time novel called ‘Perfect Circle’, poetry and ‘character tales’ set in modern and ancient Calgary, Scotland and the Rockies. Patricia is a member of CHI.

Copyright 2019, Patricia Paterson. Reproduction not permitted except by permission of the author patriciam18a@gmail.com

Editor’s note: For more information about the status of this development, see “CHI’s 800 Block of 17th Ave. Fact Sheet” under the Heritage Watch tab on our web site.