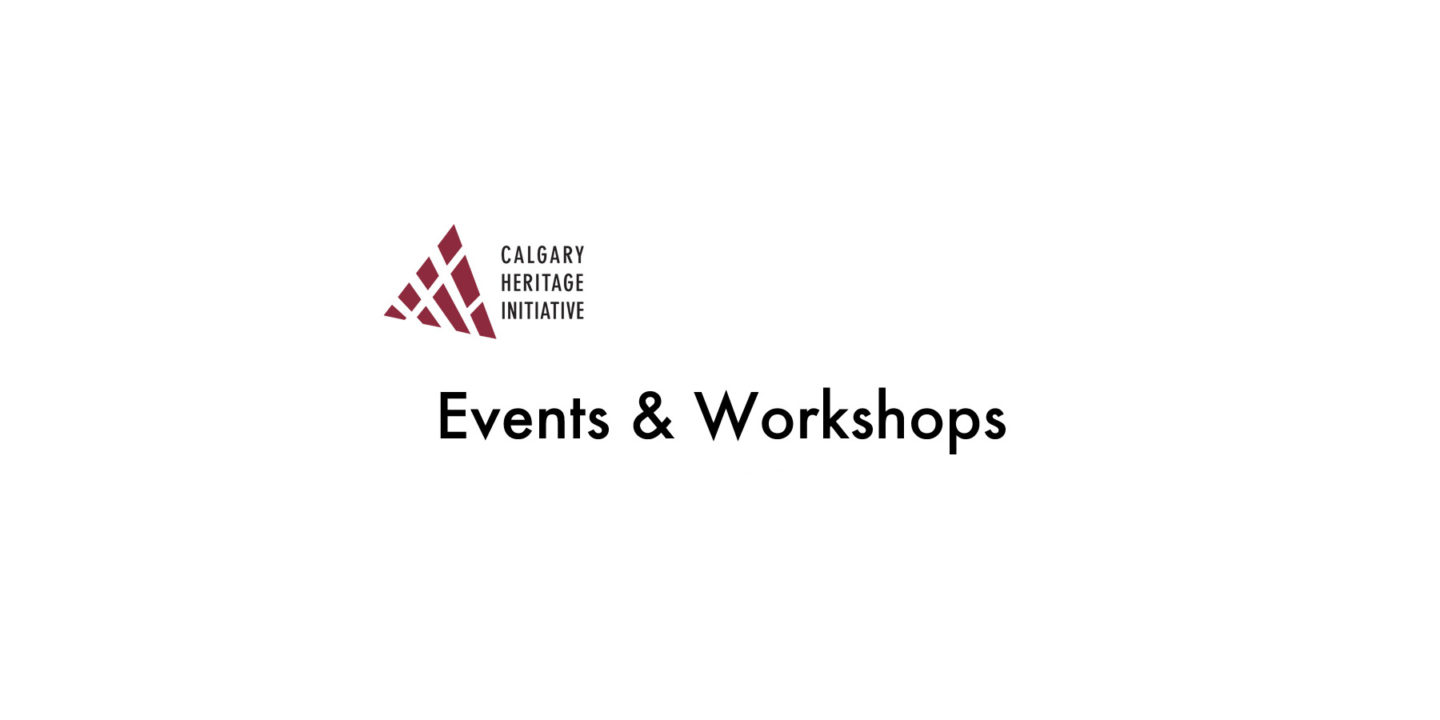 We were very pleased to welcome Raymond Biesinger, a Montreal artist with Alberta roots, as our guest speaker. Raymond’s illustrations of Canada’s (and Calgary’s) lost historical buildings are featured in this newly released book. Raymond’s shared how his art was inspired by our lost heritage and what these buildings…and their stories…can teach us.

Questions about the AGM: email contact@calgaryheritage.org 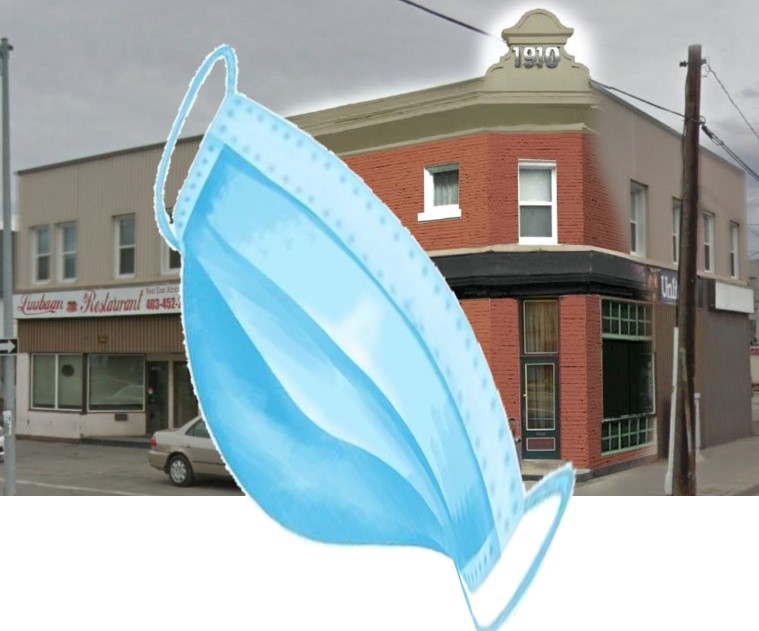 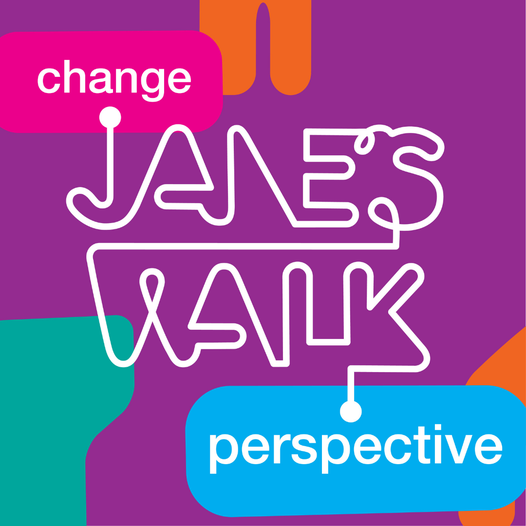 Janes Walk is a global festival of neighbourhood walking tours held in Calgary and around the world each May, inspired by the philosophy of Jane Jacobs (1916-2006), an urbanist and activist whose writings championed a fresh, community-based approach to city building.

This year, The Calgary Foundation’s Janes Walk has gone virtual or self-guided and has extended its presence from the May 7-9 weekend right through the summer.

Visit the Heritage Places tab on our Heritage Inspires YYC web site.  Discover historic neighbourhoods, cultural landscapes, old photographs, and for the inspired, click on one of the Community Histories tiles and look for a self-guided walking tour.

For a Virtual Janes Walk Experience from a bird’s eye view, explore our Heritage Inspires YYC YouTube Channel. What would Jane Jacobs say about how Calgary’s historic areas should evolve?

Follow our Facebook and Instagram pages at @calgaryheritageinitiative and @heritageispiresyyc for lots of Janes Walk challenges. Walk or bike a route to find Century Homes; retrace a Calgary Herald history walk, published in the mid-1990s, and think about what’s changed in 25 years; seek out lost heritage and historic buildings that have been given new life.

During the week of October 19th, members in good standing were emailed instructions for joining the meeting along with a package containing the agenda, financial statements and minutes from last year’s AGM. The President’s report, Heritage Watch, Communications, Membership and Events reports were presented during the virtual meeting. Only regular CHI business was addressed so that CHI could meet the filing requirements of the Alberta Societies Act. Eleven members agreed to stand to serve on the board of directors (CHI bylaws allow for up to 15).  A Q & A session concluded the meeting.

Questions about the AGM: email contact@calgaryheritage.org

The guest speaker we had lined up for the AGM, Alastair Pollock to speak on Heritage Tools & Incentives for Calgary Communities, originally scheduled for April 15th, 2020, was canceled due to Covid-19.

What does a 1912 Craftsman in Sunnyside have in common with a 1977 Expressionist style home also known as the ‘Energy Saving Earth and Garden Home’ in Glengarry? Both tell a story about Calgary’s past. Both are designated historical resources meaning they are legally protected by City Council from future demolition or dramatic renovation.

As of September 2019, Only 312 residences (including apartment blocks) were listed on Calgary Heritage Authority’s Inventory of Historical Resources and of these, only 32 were designated. We are losing our historic residential character at an alarming rate!

This workshop, attracted several participants who are considering designation and others who wanted to learn how Calgary’s heritage gets evaluated and protected. 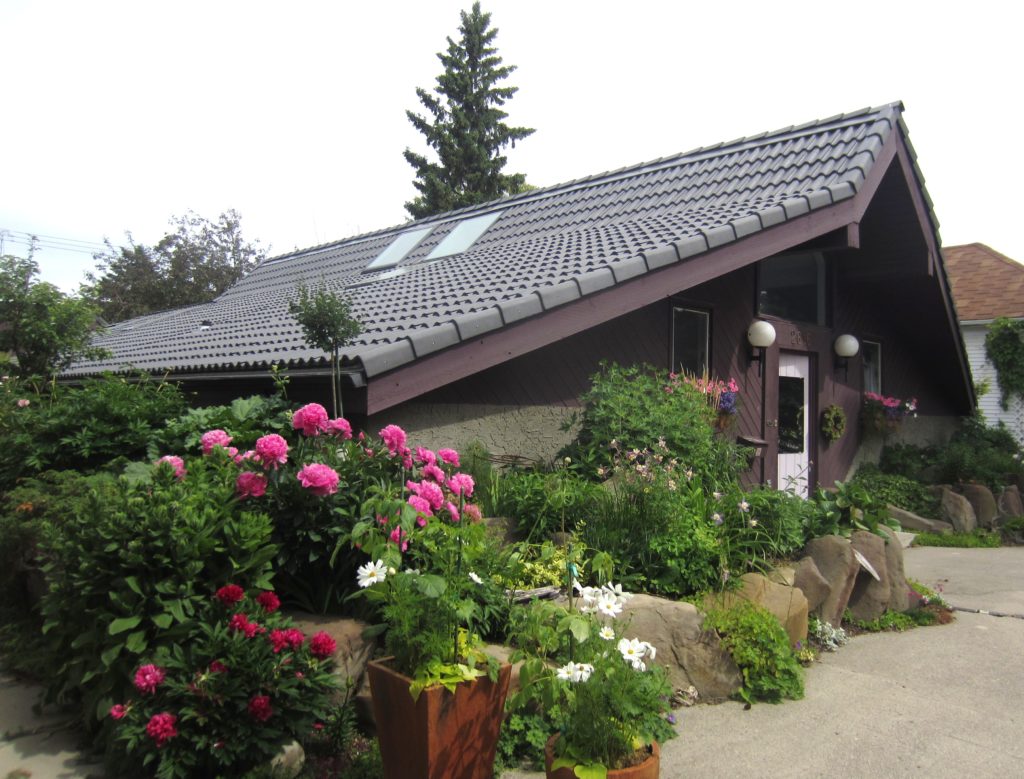 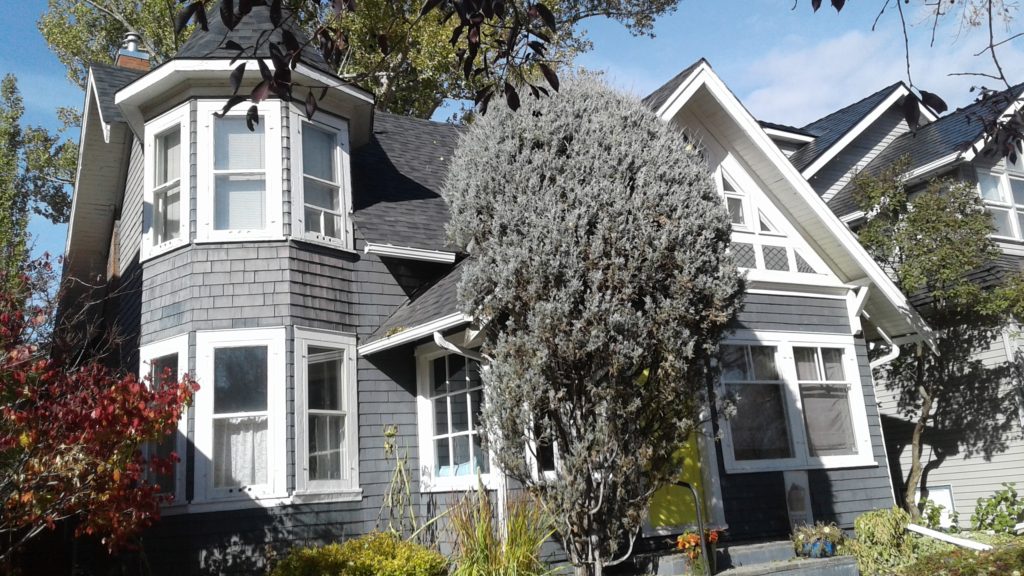 ORMAN RESIDENCE: First and only designated house in Sunnyside and recently sold to a couple looking for a heritage home.

Topics Included:
• Designation criteria, how the process works, the role of the City’s Heritage Planners and available grants
• How heritage homes are valued in the real estate market and what buyers are looking for
• The pros & cons, fact & fiction of designation
• Economic, social and environmental benefits

Thanks to our presenters, the City of Calgary and our refreshment sponsor, the Calgary Heritage Authority

Oh the Fun We Had! 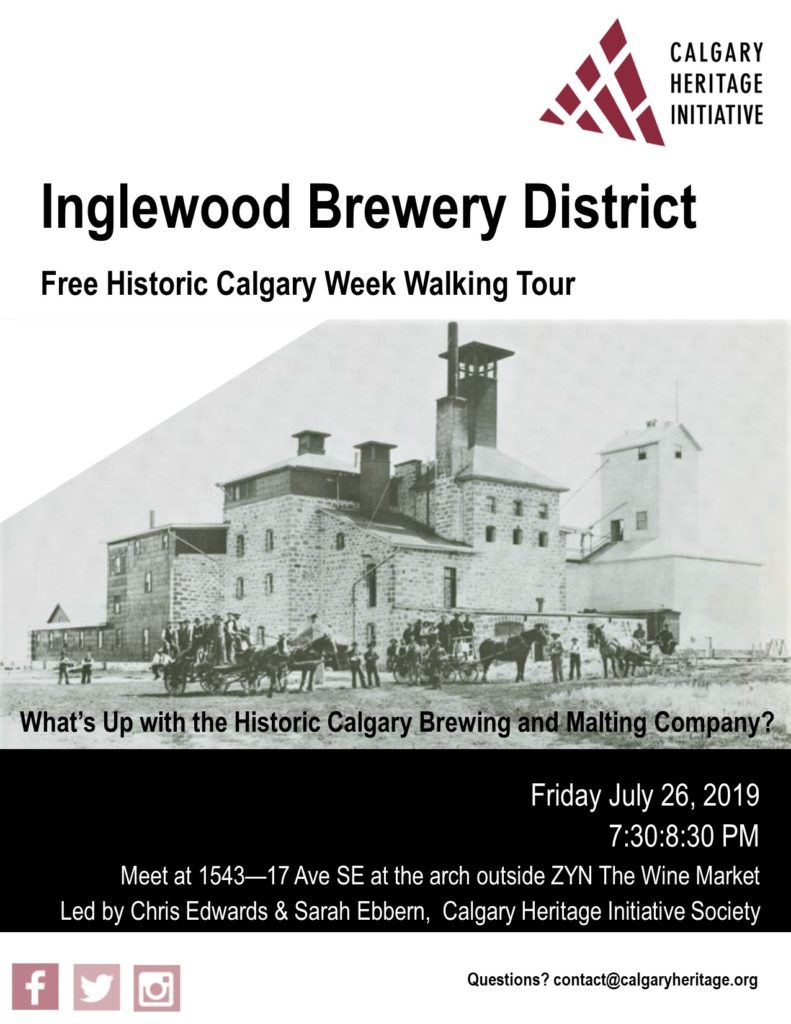 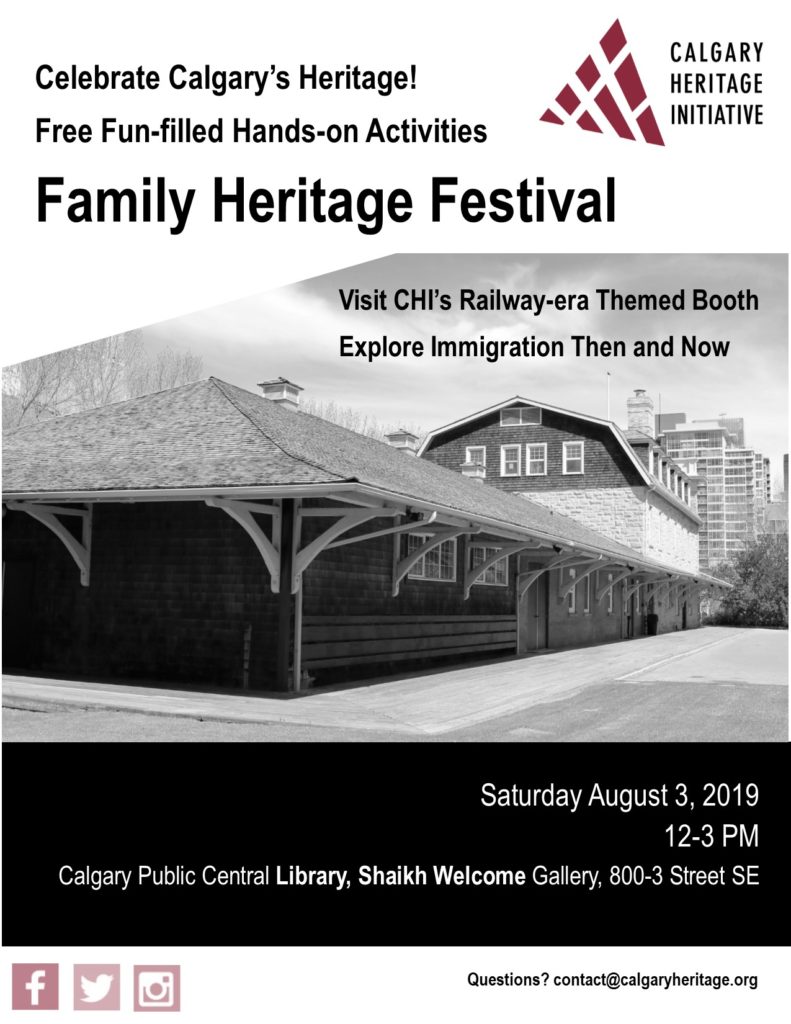 Download the  full Program Guide for the 29th Annual HCW

With over 100 events, this was the largest, most fun-filled HCW ever. Sports, dancing, music and cinema were only a few of the events. Behind all this fun  were the stories of the people that made Calgary and region their home over the centuries.

The Calgary Heritage Initiative’s Annual General Meeting was held  at Calgary’s newest heritage-building-of-the-future: the spectacular Calgary Public Central Library. Thanks to the CPL for providing a terrific tour and free meeting space to volunteer community groups such as CHI!

Our guest speaker, Carolyn Ryder, introduced us to the new “Calgary’s Story” space and resources on the 4th floor (formerly the Local History Room in the old library). Materials useful to researching building history and that celebrate our unique stories, including photos, books and maps, can be found here. Carolyn introduced the Historian in Residence Program, Indigenous Placemaking, and the Williams & Harris Shared History Centre that ensures stories are told and collected, through new technology in the Story Studio and old technology in the Vintage Media Lab. Carolyn extends a personal invitation to anyone interested in an individualized orientation to “Calgary’s Story” and the very rich collection of books, documents, records and photographs. Call 403-260-2600.

CHI’s most successful Demystifying event ever! Sixty participants learned about historical designation from a panel of heritage experts along with homeowners sharing their designation experience. 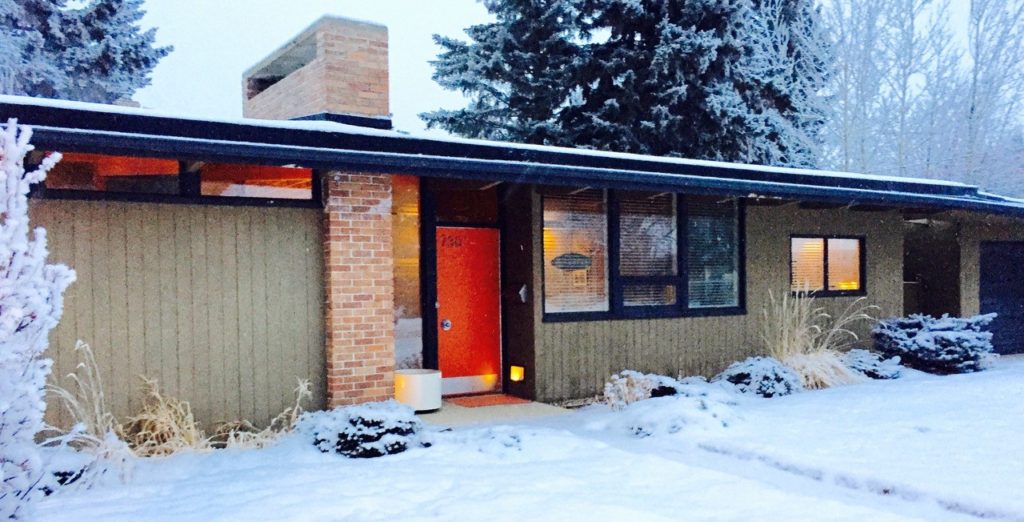 ORMAN RESIDENCE (1912) First and only designated house in Sunnyside and recently sold to a couple looking for a heritage home.

The designation criteria and how the process works.
What is fact – Yes, City Heritage Planners help throughout the process.
& What is fiction – No, designating a property is not overly restrictive nor does it reduce market value.
How heritage properties are valued in the market.
Pros/cons and the economic, social and environmental benefits.
What Municipal and Provincial grants are available.

Thanks to our guest speakers for sharing their time and expertise, The Calgary Heritage Authority for sponsoring the refreshments and The Windsor Park Community Association.

This year’s Historic Calgary Week explored the “Power of Partnerships”!

CHI’s hosted a booth at the cSpace Farmers Market

CHI joined more than a dozen of Calgary’s best-known heritage organizations for a fun-filled afternoon of hands-on activities for everyone celebrating the heritage of Calgary and Alberta. CHI’s booth explored Calgary’s early development as the first newcomers arrived by rail to settle the west.  In partnership with the Chinook Country Historical Society, the Calgary Public Library and Shane Homes YMCA at Rocky Ridge. 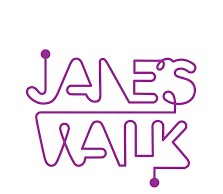 Finding Nimmons: Past, Present and Future

Once upon a time, Williams Nimmons built a magnificent two-storey, red brick and sandstone ranch house, which today is a Bankview icon, for his beloved wife, Isabella. He perfectly placed the house so Isabella would had great view of the sweeping prairie and the village of Calgary. 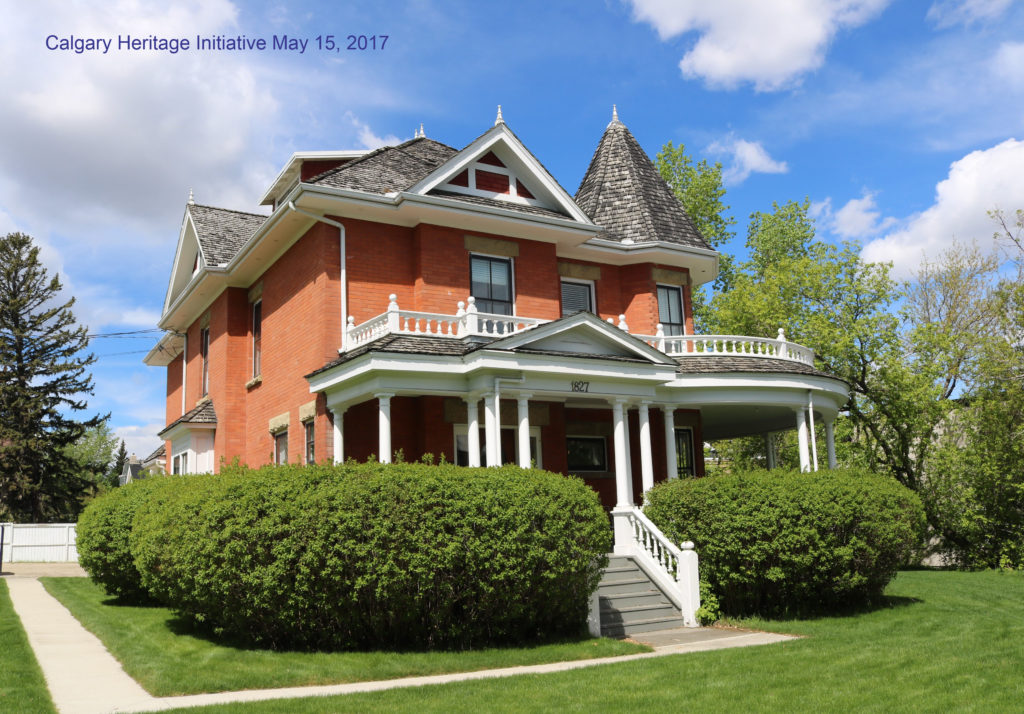 CHI’s Jane’s Walk on May 6th took us on a provocative tour of Bankview’s birthplace: the Nimmons Residence site, Nimmons Park, and Nimmons Corner. Lindae Stokes, Calgary Heritage Initiative, spoke to the past, Nathan Berko, Bankview Community Association, covered the present, and Ward 8 Councillor Evan Woolley led us into the future.

The walk explored  why Williams Nimmons was so key to Bankview, how the Nimmons family influenced and shaped history, and why we should we care about the municipal designation of the Nimmons residence.

Let’s keep the dialogue going about how to preserve heritage integrity for future generations in the face of inner-city densification. Awareness, a recognition of the value of heritage, tools (like tax incentives) to support protection, and passionate advocates will help create the political will to do this. 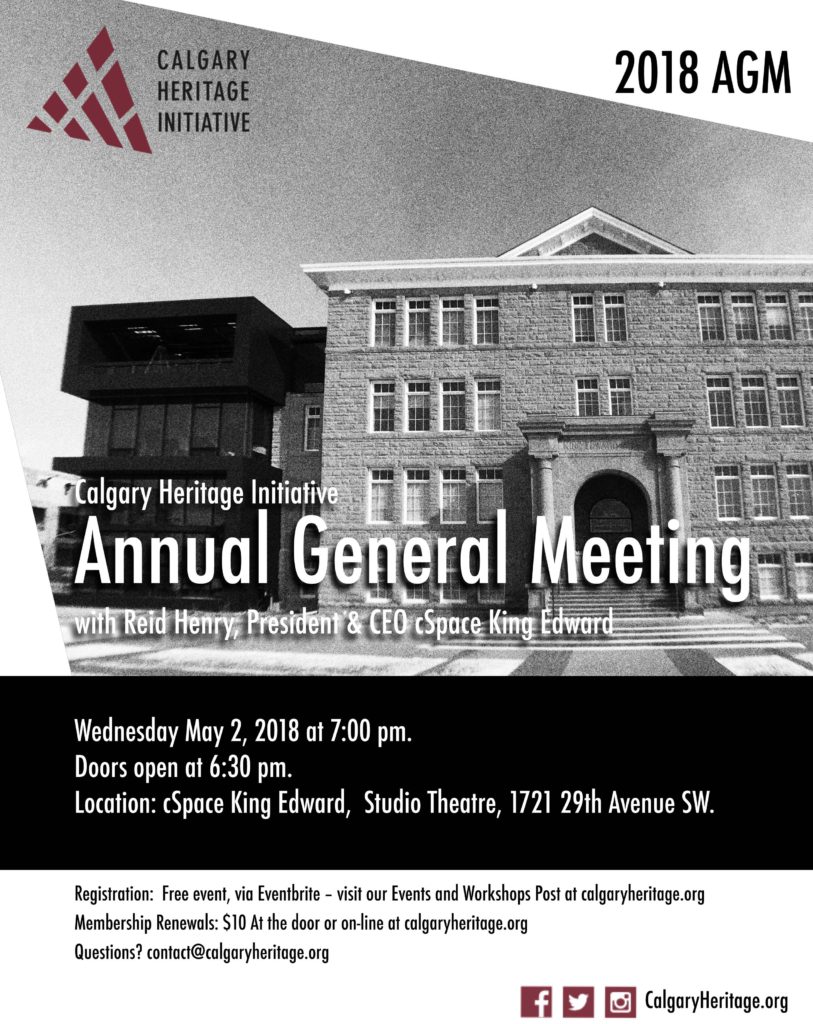 CHI thanks cSpace and Reid Henry for his insightful and fascinating talk on adaptive re-use, heritage rehabilitation and social and economic benefit. It dove-tailed perfectly with CHI’s strategic focus. Reid capped off the evening with a personally guided tour of cSpace. 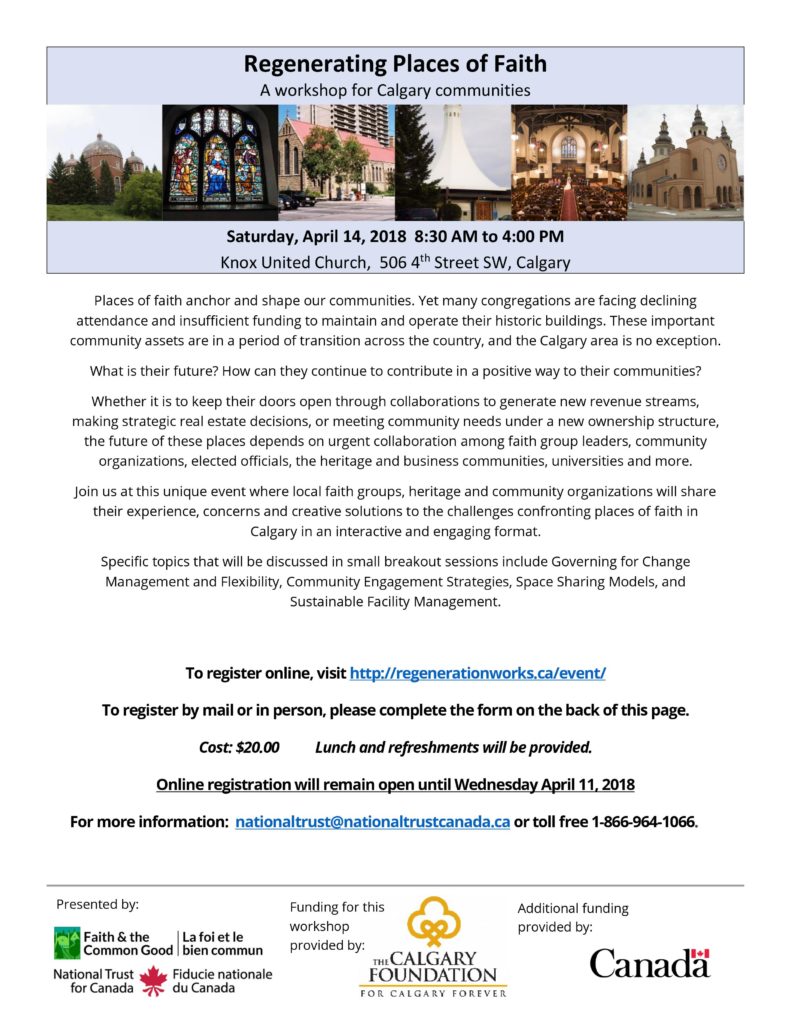 The National Trust for Canada hosted a workshop on Regenerating Places of Faith  for Calgary Communities at the historic Knox United Church.

TALK: Booze, Broads & Brothels… A History of Calgary’s (Almost) Oldest Profession, in the era of the North West Mounted Police and railway settlement.

Notoriously known as the booze, brothel and gambling capital of the Canadian West, early Calgary was home to dozens of entrepreneurial sex workers. Kimberley Williams, Associate Professor of Woman’s and Gender Studies, Mount Royal University, introduced  a few of these dynamic women, whose clients were the miners, ranchers, NWMP officers, and CPR railmen considered the “mavericks” of Alberta’s pioneering past.  For information on walking tours based on this talk go to http://yycsexworkwalkingtour.weebly.com

CHI’s top endangered site for 2018 is the Inglewood Brewery. The brewery supplied  the bars and brothels of the era. To learn more, and find out what you can do, see CHI’s Inglewood Brewery Fact Sheet on our Heritage Watch Page. 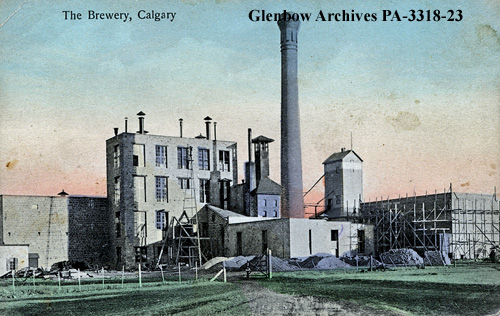 Are you interested in investigating which of Calgary’s historic railway era hotels and lodges might have served the sex trade? Consider writing a story for the Your Stories project. See  Your Stories  for more details or email us at contact@calgaryheritage.org 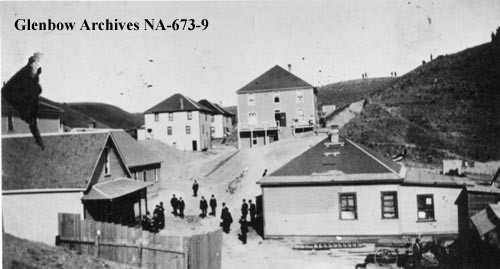 PARTNERS: Calgary Public Library, The Glenbow , and City of Calgary 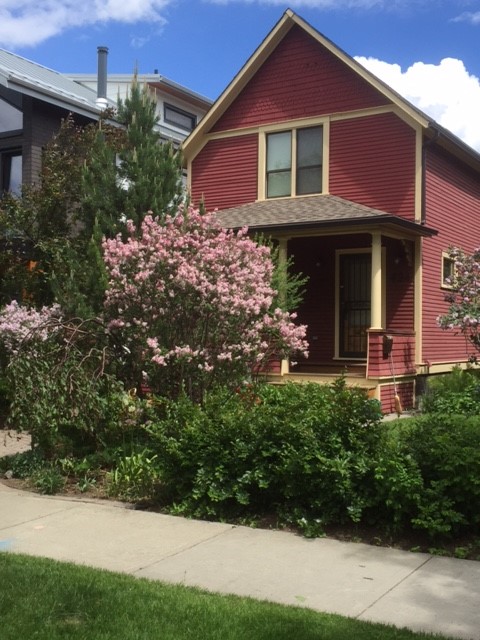 PARTNERS: City of Calgary and the Calgary Heritage Authority

Our third heritage designation workshop, featured homeowners who have had their properties designated and heritage experts familiar with the designation procedure.  Four speakers shared their designation stories and covered topics such as selling unused residential density, generating transferable residential density and taking advantage of City of Calgary and Provincial grant programs.  The presentations and discussions explained everything you need to know about historical designation from people who have experienced it. Have you heard that designating a building is overly restrictive and reduces market value? Our panel of heritage experts dispelled some of these myths surrounding designation and presented information on the resources available to preserve and protect your heritage home or building. 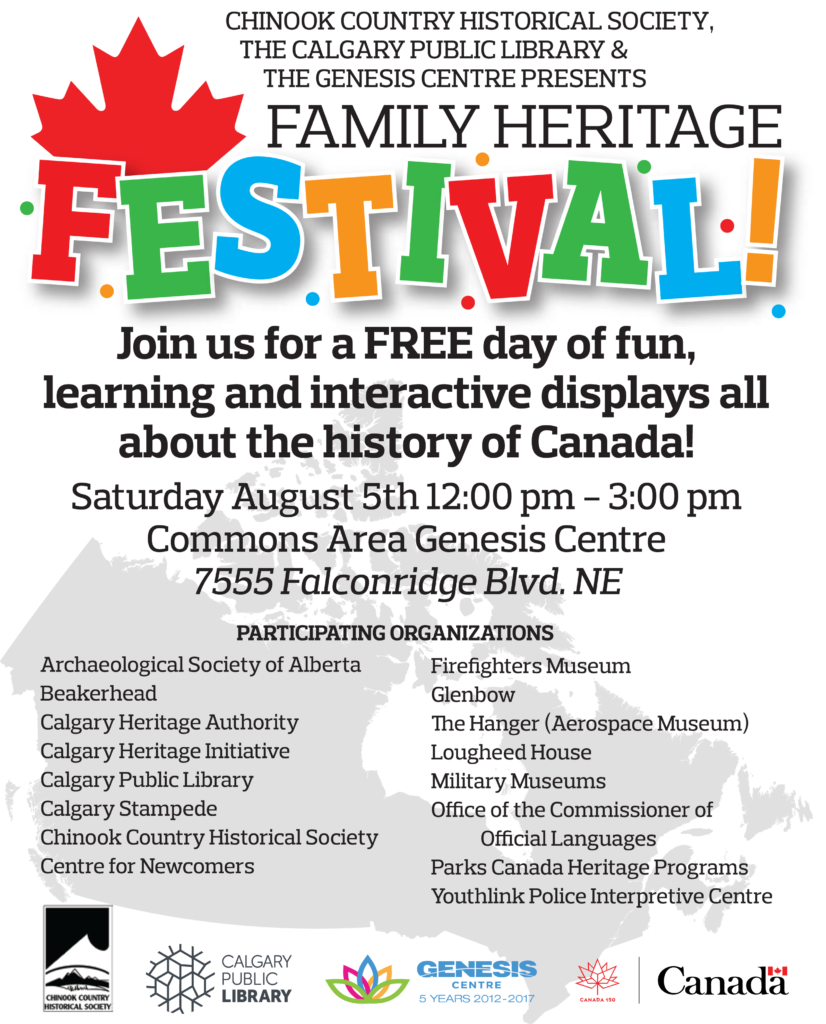 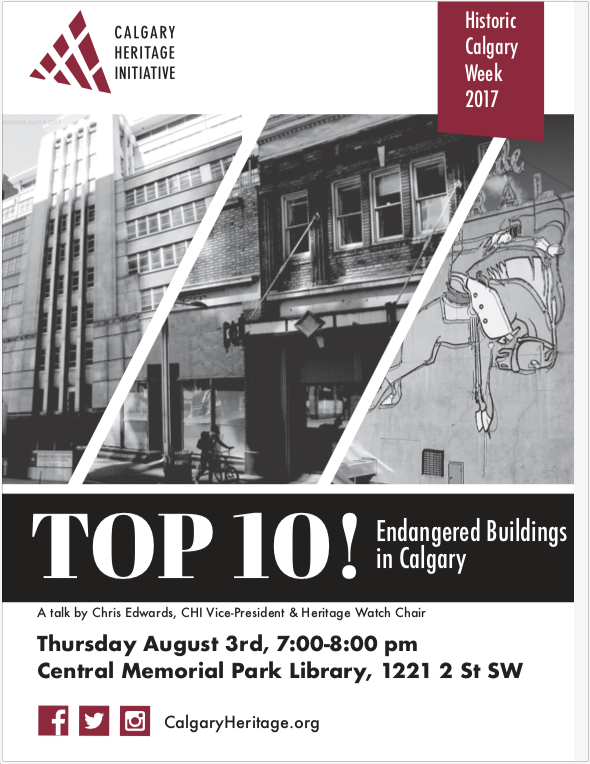 10. Western irrigation headworks including the headgate and pump house. 1912. This is a great example of industrial heritage in the city.

7. 17th Avenue heritage- Jalland block, Condon Block, 800 block. These are all owned by Arlington Street and slated to be torn down and replaced.

6. Olympic Plaza, 1987. One of the biggest concerns for people will be what happens to the 22,000 bricks, inscribed with names and messages.

5. Heritage designation. Designation itself seems to be in danger. Council has de-designated a protected heritage site, allowing for loss of protection, a waste of the resources that went into assessment in the first place, and sets a precedent.

4. Bill C323. This bill is in danger of not passing. Bills such as this have been very successful elsewhere, providing additional jobs, tax revenue, restored character buildings, and providing a wide range of housing.

2. Calgary Brewing and Malting, 1894-19802. One of the dangers is that it is hard to understand the site. There is a large collection of original sandstone buildings, but they have all been covered up by later buildings. They’re still in there! This is another good example of industrial heritage in Calgary. A site that many can relate to, and have fond memories of. There is great potential for a mixed use brewery district here.