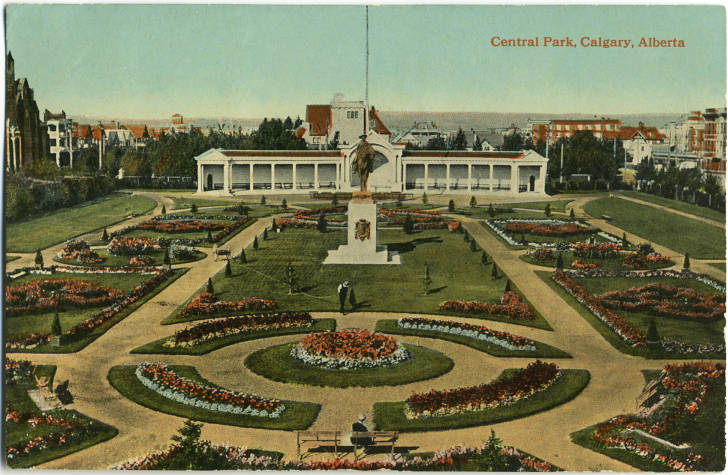 Central Park Looking West, with Bandshell 1917 (CPL Postcards from the Past)

This November, why not visit the beautifully restored Central Memorial Park and reflect on our war memorials?

The South African (Boer) War Memorial called “the Horseman of the Plains” located at the park’s centre, was designed by renowned Parliament Hill sculptor Louis Phillippe Hebert, a French Canadian. At the time of its unveiling in June 1914, it was considered “one of the four finest equestrian statues in the world.”  It is prized as one of the most impressive works of historic sculpture in Calgary, and the earliest civic art commission. 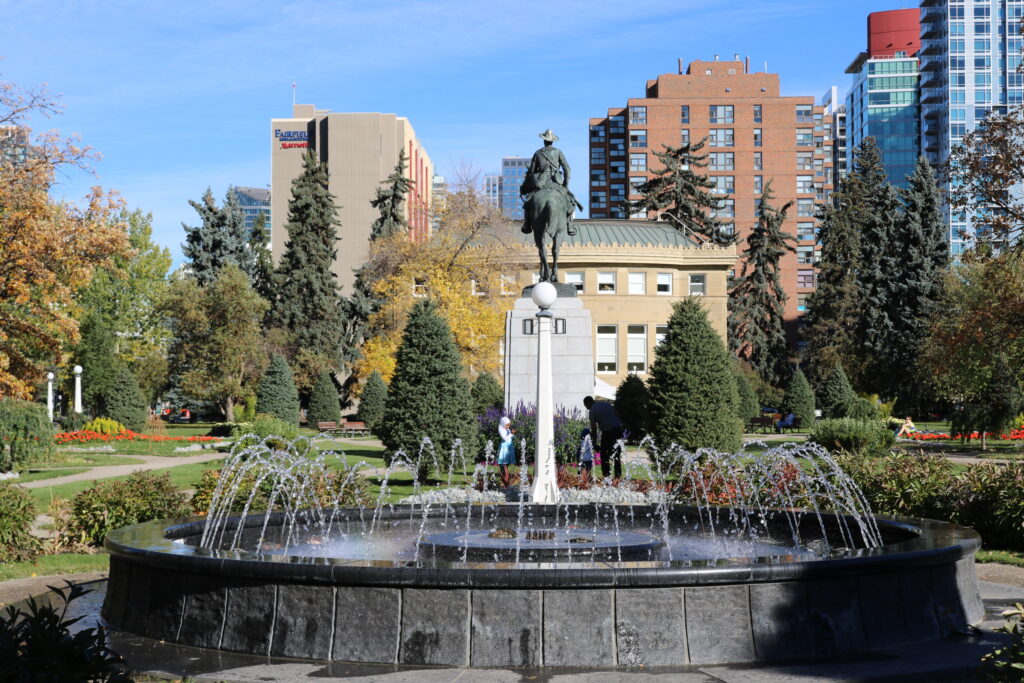 The Imperial Order Daughters of the Empire First World War Memorial was unveiled at the park’s east end on June 23, 1924. The bronze statue of an infantryman with rifle held high, was designed by Montreal sculptor Coeur-de-lion MacCarthy.  It includes a tablet on a concrete plinth. 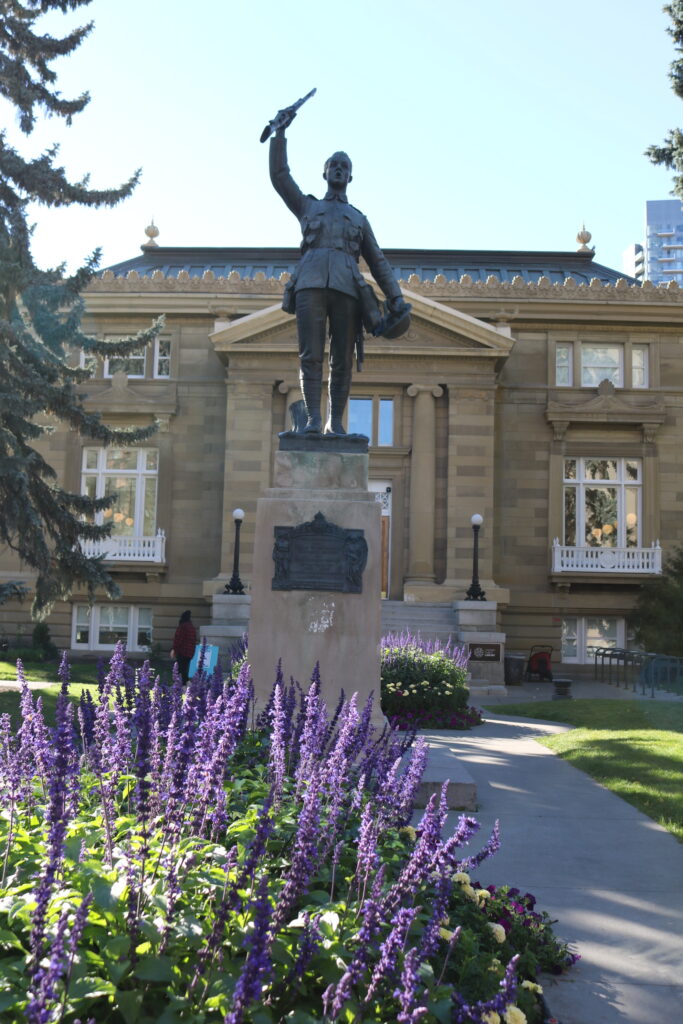 The west end bandshell was demolished in 1928 for the construction of a granite cenotaph with paved plaza and ceremonial granite benches, commemorating Calgary’s war veterans. When the cenotaph was dedicated on November 11, 1928, the old Central Park was renamed Memorial. A granite drinking water fountain commemorating 50th Battalion of World War One was added in 1930. The cenotaph was refurbished in preparation for the Royal Canadian Legion’s Dominion Convention, held in Calgary in 1994. A granite commemorative medallion was placed. 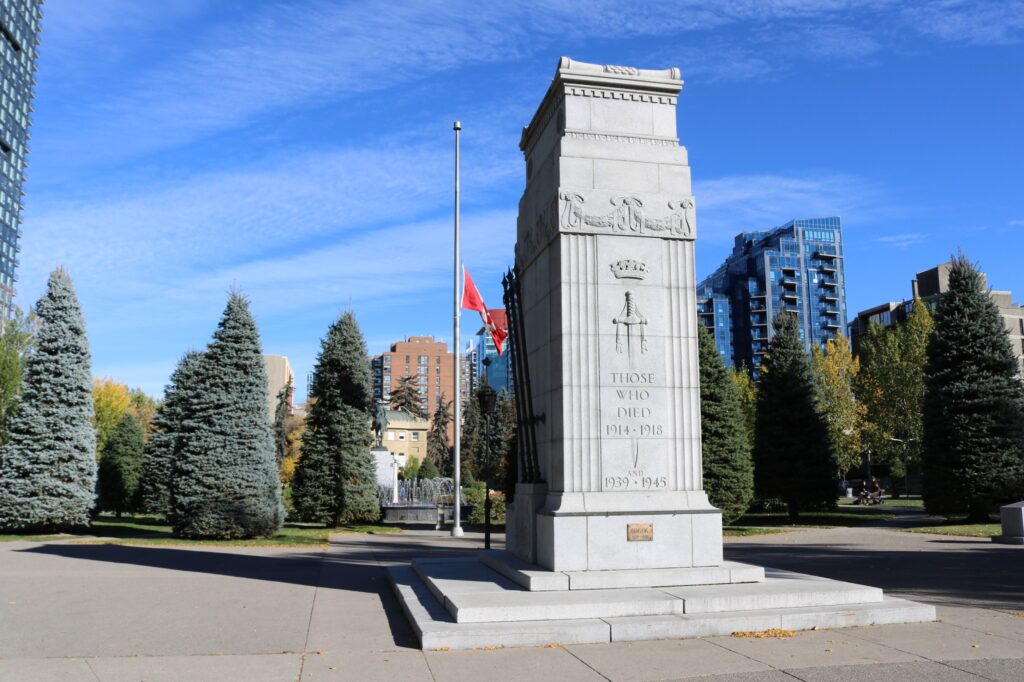 Central Memorial Park, located at 4th St. SW and 12 Ave. SW, is Calgary’s oldest surviving park, one of the last remaining formal Edwardian parks in Western Canada, and the site of our annual Remembrance Day Ceremonies. The Park is both Municipally and Provincially designated as a historic resource.  The Memorial Park Library became a National Historic Site in 2018. The Library was constructed in 1910 with a grant of $80,000 from the Carnegie Foundation. 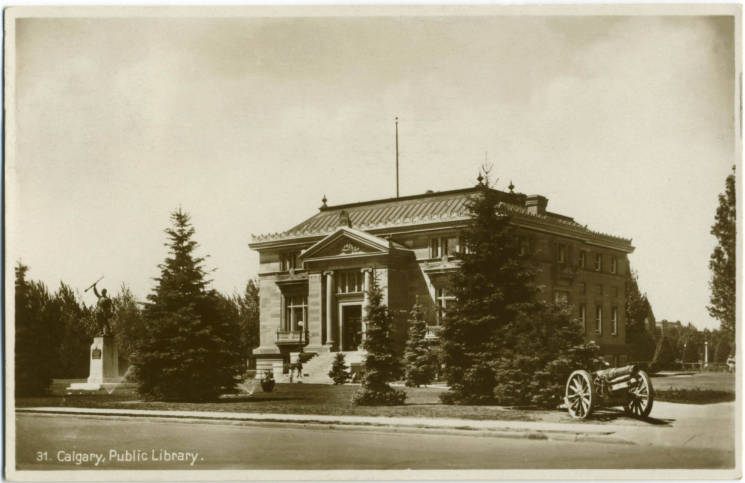 Memorial Park Library (CPL Postcards from the Past)